Here's a new study of nostalgia and retro culture from Zer0 books  - Alessandro Gandini's Zeitgeist Nostalgia: On Populism, Work, and the 'Good Life'. 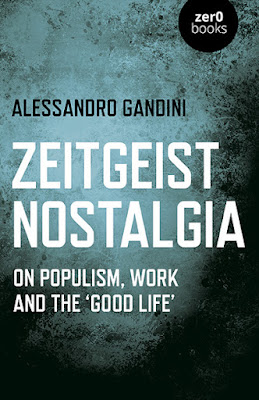 "We live an age of nostalgia, incarnated by populist fantasies of “taking back control” and making nations “great again". In the long aftermath of the 2007-08 economic crisis, nostalgia has been established as the cultural zeitgeist of Western society. Populist fantasies of nostalgia represent a cry for help against the demise of the societal model of the postwar era, based on stable employment and mass consumption. The promise of an impossible return to the 'good life' of the 20th century, Gandini contends, particularly appeals to the older generations, who are incapable of making sense of the evolution of Western societies after decades of globalization and neoliberal policies. The younger generations, in the meantime, are instead trying to build a new 'good life' based on another form of return, this time to old practices of craft production and consumption."

So more about retro-politics - Brexit, Trump, and similar "make ___ great again" / neo-traditionalist moves in Europe - than about, say, retro-pop as in hologram tours, artists stealing from the 80s/90s/early 2000s, etc.  And  about hipsterism and its consumption patterns as a rejection of dematerialised lifestyles but expressed more in the realm of  Etsy / micro-breweries etc than the music domain of vinyl fetishism, the antiques market for analogue synth hardware, etc.

Posted by SIMON REYNOLDS at 1:22 PM