"Donald Trump won on a coalition of people who felt mocked by the future" - Anand Giridharadas, MSNBC.

"The trouble is that this new, American version of the disinherited has squandered their voice on a dyspeptic scream, a retro turn to racism and sexism, without anything resembling a plan, or a new vision for America." - Kevin Baker, The New York Times

"Reactionaries such as Trump, writes the American academic Mark Lilla in his new book, The Shipwrecked Mind, 'dream of stepping back in history to recover what they imagine was lost'. But what exactly has been lost and by which measure does Trump define greatness? Lilla has written that 'Make X Great Again' is the demagogic slogan of our time, and many march under that banner, from Trumpians to political Islamists. Here in Britain, a longing for a lost though indefinable greatness energises the Hard Brexiteers, with their fantasies of a lost sovereignty (Trump said that his anti-system revolt was 'Brexit-plus-plus-plus'). Professor Lilla draws a distinction between the conservative and the reactionary mind. Reactionaries are, in their way, 'just as radical as revolutionaries and just as destructive'." -  Jason Cowley, The New Statesman

"Trump is emblematic of what anthropologists call “crisis cults.” A society in terminal decline often retreats into magical thinking. Reality is too much to bear. It places its faith in the fantastic and impossible promises of a demagogue or charlatan who promises the return of a lost golden age. The good jobs will come back. The nation will again be prosperous. The decrepit cities will be rebuilt. America will be great again. These promises, impossible to achieve, are no different from those peddled to Native Americans in the 1880s by the self-styled religious prophet Wovoka. He called on followers to carry out five-day dance ceremonies called the Ghost Dance. Native Americans donned shirts they were told protected them from bullets. They were assured that the buffalo herds would return, the dead warriors and chiefs would rise from the earth and the white men would disappear. None of his promises was realized. Many of his followers were gunned down like sheep by the U.S. army." - Chris Hedges, Truthdig

"Theorist Svetlana Boym distinguishes between the personal and political manifestations of nostalgia with her dichotomy: reflective nostalgia versus restorative nostalgia. The latter ranges from curmudgeonly intransigence towards all things newfangled and progressive, to full-bore militant efforts to turn back the clock and restore an older order (ranging from recent American eruptions like the Tea Party movement and Glenn Beck's 2010 'Restoring Honor' rally to various flavours of theocratic fundamentalism, royalism, nativism, neo-fascist campaigns for an ethnically cleansed homeland, and so forth).  Restorative nostalgia tends to be big on pageantry (think of the Orange parades in Ulster), folklore, and Romantic nationalism. These bolster the collective ego with tales of past glory, but also nurse ancient injuries and insults (think of the centuries-old grievances festering in the nations of the former Yugoslavia).

"Reflective nostalgia, in contrast, is personal, eschewing the political arena altogether in favor of reverie, or sublimating itself through art, literature, and music.   Far from wanting to resurrect a lost golden age, reflective nostalgia takes pleasure in the misty remoteness of the past and cultivates the bittersweet pangs of poignancy.  The danger of restorative nostalgia lies in its belief that the mutilated "wholeness" of the body politic can be repaired. But the reflective nostalgic understands deep down that loss is irrecoverable: Time wounds all wholes.  To exist in Time is to suffer through an endless exile, a successive severing from those precious few moments of feeling at home in the world" - me, from Retromania

here's Richard Rorty, philosopher, agreeing with Phil K (in comments) and prophesying Trump almost 20 years ago in Achieving Our Country. 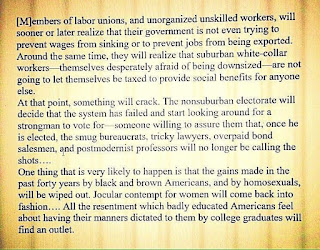