"We have become pack rats of our collective past.... We’re trapped in what might be called a Revival Spiral. It used to be that time and distance were allowed before present culture plundered...  But, in a world where images of the past are just a finger swipe away, all bets are off. We have over-plundered the ​’50s, ​’60s, ​’70s, ​’80s and ​’90s. Even fetishising Y2K is starting to look a bit tired.The solution? The very recent past. The era in the frame? The mid-to-late Noughties...."

"... the ​“Indie Sleaze” movement, the revival of a late-Noughties scene where torn band tees dominated, when American Apparel was a shop, not a scandal, when everyone stuck out their tongues and it was a badge of honour to be photographed by party snapper Mark Hunter, aka The Cobrasnake....

".... While some of the current retro culture is anemoia – nostalgia for an era you didn’t live through... The Revival Spiral sees us leaning into a seemingly ever-hastening longing for the recent past. This is possibly because change is constant in digital culture, meaning we’re quickly nostalgic for eras that, on paper, we have only just left.

".... This nostalgic state of mind has been magnified and sped up for a generation who have lived through turbulent times: Trump, Brexit and (there it is) a global pandemic. Pre-2016 might only be seven years ago but, given those global spasms, it feels like a lifetime. To immerse yourself in that time is comforting...

".... Sarah Lloyd is a Senior Lecturer in Fashion and Visual Culture at the University for the Creative Arts. As a researcher in nostalgia in fashion, she argues that the phenomenon is a direct result of the fact that we consume culture like we listen to podcasts: at 1.5x speed.

“The plethora of images and information we are exposed to means we simply cannot process what we’re experiencing,” she says. ​“For me, revival culture is gaining a sense of control over an ever-shifting cultural landscape and relocating oneself in the recent past in order to fully process the present. [It’s] a way of temporarily stopping time.”.... Lloyd says a solely digital life experience has an effect, too. ​“When growing up without an iPhone or social media is unimaginable, the relatively recent past seems like ancient history.”

Revival spiral - my term for that (or something close to that) is revival simultaneity, where we're caught in the cross-fire of multiple revivals and re-revivals going on at the same time.

Interestingly Cochrane starts the piece referencing a 1983 piece in The Face piece by Jon Savage, "The Age of Plunder" - about the rise of pomo pop - which intensifies the feeling of recursion and spiraling echoes of echoes of echoes...    as retro intensifies and infolds, so does the commentary on it, the retro-discourse

Posted by SIMON REYNOLDS at 2:35 PM No comments: 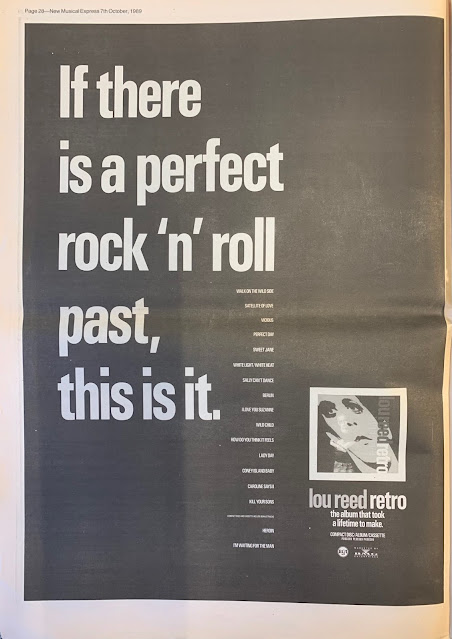 Not that early (1989  - 'retro' starts popping up fairly frequently from the start of the '80s). And it's a loose use of the word (retro, strictly speaking, is a new thing in the style of the old, not the actual old thing itself recirculating as a classic or golden oldie, a comp or career retrospective), but nonetheless an interesting framing of a lifetime's work

Posted by SIMON REYNOLDS at 5:09 PM No comments:

Email ThisBlogThis!Share to TwitterShare to FacebookShare to Pinterest
Labels: RETRO THE WORD

Chuck Klosterman  has been getting some blow-back recently for the above observation, made in a Vulture interview around his latest opus The Nineties: A Book  - i.e. the idea that there was no epistemic essence to the 2000s or indeed the 2010s
Forgive me but it does feel like a thought that's been around the block a few times already - c.f. me on  the Noughties as a Zeit without a Geist, similar formulations by Mark Fisher, or indeed this 2011 Vanity Fair  article by Kurt Anderson.
But I guess these are the eternal returns and endless recycles of our recursive culture, innit
Posted by SIMON REYNOLDS at 12:54 PM 3 comments:

"It’s not just that old hits are doing gangbuster numbers on Spotify. When artists such as Taylor Swift, Angel Olsen, Laura Mvula and Mitski want to pivot to pure pop, they turn to Eighties signifiers. You can hear it, too, in the glittery ebullience of Dua Lipa and Jessie Ware. There are even meticulous Eighties fetishists who create multiverse remixes of recent hits: Initial Talk made Lipa’s New Rules sound like Tiffany and Dead or Alive, while Louis La Roche turned Adele’s Easy on Me into the Madonna ballad that never was.

"Top of the pile right now is The Weeknd, whose latest album Dawn FM is framed as an oldies radio station playing in purgatory. It’s the dream hybrid of new wave, electro and Thriller-funk that the Canadian has been working towards for a few years now: his neon-bright 2019 single Blinding Lights is the biggest Billboard single of all time. Among Dawn FM’s blatant homages to the mega-pop era are a monologue by Quincy Jones, a song named after Bret Easton Ellis’s novel Less Than Zero, and a very peculiar English accent. The Weeknd has long aspired to be the kind of pop colossus who bestrode the Eighties, so why not explicitly sound like one?"

A friend quipped to me in 2010, when I was finishing up Retromania, that the Eighties revival had been going on longer than the actual Eighties had - way more than a decade. In the book I titled a subsection "... the Endless Eighties"

As Lynskey observes, in 2022, "the self-conscious Eighties revivalism of the electroclash scene is now 20 years’ old, as distant from us as it was from the heyday of The Human League."

Indeed I was teaching it as history - two separate 80s revivals in fact: electroclash and also the minimal synth redux movement - in a class on DIY only last week, as a coda to the main part of the class which was on synth-punk / early-industrial / DIY electropop of late '70s / early 80s i.e. the future that then became a retro-future or multiple retro-futures

Posted by SIMON REYNOLDS at 12:45 PM No comments:

Why Are Some Zoomers So Wistful For the '80s? asks Ashley Reece at Jezebel

"There’s an ‘80s community on Instagram and TikTok, dominated by Gen Z’ers who have such an affinity for the decade that they’ve decided to make the ‘80s part of their lifestyle. What begins as a cursory look into mom’s closet morphs into a harmless obsession with an era that was over nearly a decade before most of them were even conceived. Their clothes scream Pretty In Pink, their hair is straight out of Heathers, and even their bedrooms look like the set of Valley Girls.

"The surface appeal of the ‘80s is obvious: the music was great and the fashion was out of control. But just as the ‘80s were marked by MTV, malls, and Madonna, they were also plagued by the nearly decade-long reign of President Reagan, the AIDS epidemic, and the last vestiges of Cold War paranoia. One of the most popular pop songs of the decade was “99 Luftballoons,” an upbeat pop song about nuclear annihilation. But the young members of the ‘80s community are savvy enough to acknowledge the era’s faults, and after interviewing several of them, it’s clear that their love of the ‘80s goes well beyond an affinity for Caboodles or synth. Coupled with their passion is a yearning for a time when adolescence was synonymous with freedom. Less meticulously curating feeds, more hanging out with your friends at the food court.

“It was kind of like the last decade before social media, cell phones...internet,” explained Anja Arvesen, a 19-year-old who goes by @offbrandpollypocket on Instagram. “Obviously it’s easy to romanticize something that you never experienced. But it sounds nice, in theory, the way people interacted.”

Posted by SIMON REYNOLDS at 12:30 PM No comments:

Posted by SIMON REYNOLDS at 7:07 PM No comments: