Me and Retromania make a cameo appearance in the comic book Cartoon Dialectics Vol. 3, by Tom Kaczynski! 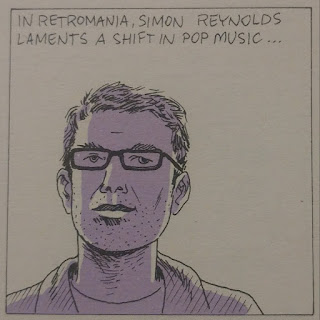 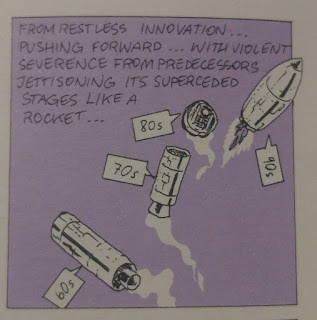 The blurb for Cartoon Dialectics Vol. 3, which is published by Uncivilized Books:

"Three stories that explore the past, the present, the future, nostalgia and it's origins, and political fall-out. 'Skyway' is a modernist neo-noir set in a mythical Minneapolis. 'Trump & Nostalgia,' a collaboration with award winning Danish cartoonist, Clara Jetsmark, explores the connections between nostalgia, immigrantion, and the politics of our moment. How will we remember the presidential menace? 'Use Your Nostalgia' explores the utopian possibilities of nostalgia."

Get the comic book here.

if the Pogles are your bag (RIP Peter Firmin)

Not so long ago, hauntology scholar Richard J. Lockley-Hobson -  and doesn't that sound like the name a hauntology scholar ought to have? like one of those fictitious historians or independent researchers into the arcane and paranormal that Ghost Box quote on their releases! - not so long ago Richard produced a limited-edition run of adorable screen-printed tote-bags / cotton-shoppers in tribute to The Pogles, the magical 1960s children's stop-motion animation series created by Oliver Postgate and the late Peter Firmin (aka Smallfilms - as in The Clangers, Bagpuss, Ivor the Engine etc etc). The bags quickly ran out, but another batch is coming soon, interested parties take note. Details to follow, for now here's Richard's account of how they came to be.

The story goes that the original series The Pogles was felt by the BBC to be too witchy and eldritch and unsettling for the tender eyes of  under-fives, so was quickly pulled.

But it came back in slightly toned-down form as Pogle's Wood.

I remember loving the Pogles as a wee nipper but I've no idea whether I saw the original series or Pogle's Wood -  I think the latter, though (the "wood" feels part of the memory)


How weird that these - my earliest televisual memories, pretty much (along with Andy Pandy and Bill & Ben and Weed) are up there, preserved, in the senselessly ever-expanding pubic archive that is YouTube.

Not that I have had time to rewatch them, for longer than a few minutes, of course.

I could drown in memory, if I just had the time.
Posted by SIMON REYNOLDS at 11:50 AM No comments:

fetish for personalised fading of denim as "character"
Posted by SIMON REYNOLDS at 11:41 AM No comments: