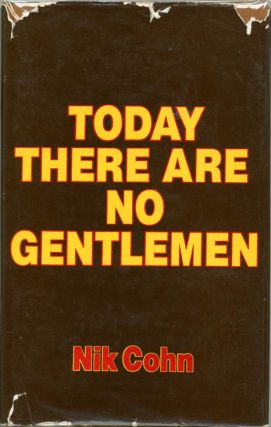 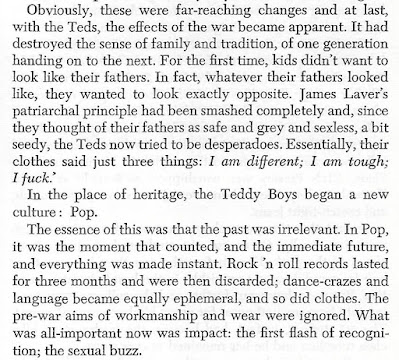 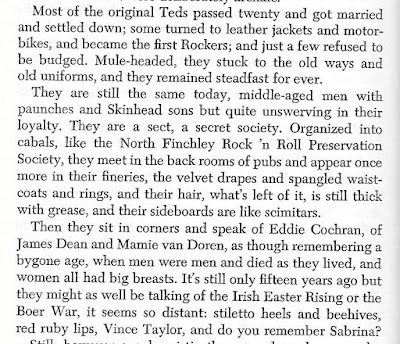 from Nik Cohn's Today There Are No Gentlemen, a shadow history of social change in the UK as reflected in men's clothing 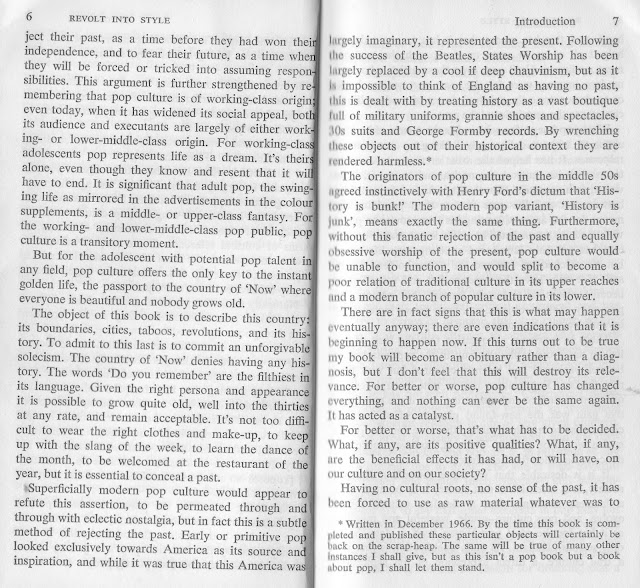 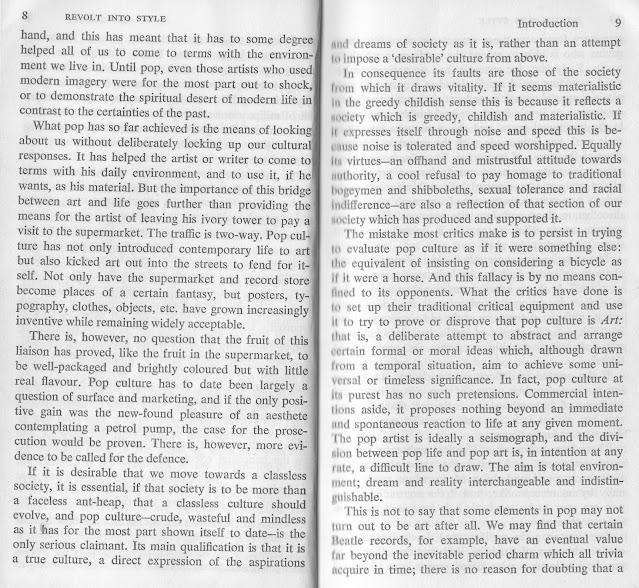 What I commented then:
When a few years ago I first read these passages from George Melly's Revolt Into Style -- specifically
the lines about pop culture being "the country of 'Now'" and the insistence that youth “denies having any history. The words 'Do you remember' are the filthiest in its language" , but the other stuff too, pages of it -- I thought, "yes, yes, this is me, this is where I'm coming from".was written in the late Sixties (seemingly between the end of 1966 and early 1968)  * so it's about the Sixties, with a little bit on the Fifties-as-Sixties-prequel, the lead up to the Sixties. And really it's about the early-to-mid Sixties: that neophiliac surge,  1963-1967, the youth-affluence-confidence drive to jettison-the-imperial-British-past (the Victoriana and Edwardiana of psychedelia is not nostalgic, Melly argues convincingly but blithely iconolastic, making a merry nonsense of jingoism and propriety and stiff 'n' starched formality - that's the meaning of the Lord Kitchener poster, the brass bed-frame wheeled around London in The Knack, shops like Granny Takes A Trip and I Was Lord Kitchener's Valet).

Born in 1963, I assimilated all this through my pores as a small kid, as sense-impressions, absorbing by osmosis the cultural-myth-in-process -- Beatles movies on TV , "Strawberry Fields Forever" and "All You Need Is Love" and "I Am the Walrus" heard on the radio, mini-skirts and hot pants and hippie hair in the streets, Dee Time on teevee. And then in the Seventies I  solidified and fortified this ideology through my pre-teen and early teen cultural choices: Monty Python and satire of various kinds;  science fiction of the New Worlds / inner space kind. Comedy (the post-Goons, absurdist-surrealist-taboo-busting kind I gravitated towards) and the mind-expanding and consciousness-raising sort of s.f. (i.e. anti-fantasy, the absolute opposite of sword'n'sorcery Tolkien-in-space) were both part of the same Liberation current in which music played such a huge and central role during the Sixties.

And then when I got into music, it was the renovated version of that ideology (postpunk ) that I embraced, while equally discovering and exploring the Sixties as very recent and still to some extent unfolding history (I devoured Playpower, The Making of a Counterculture: Reﬂections on the Technocratic Society and Its Youthful Opposition, The Dialectic of Sex, Life Against Death and Love's Body, Leaving the 20th Century: The Incomplete Work of the Situationist International, The Female Eunuch, Bomb Culture, etc etc... watched If... etc etc...   listened to The Doors, the Stones, and now with conscious ears, The Beatles).

There are those now who would say the ideas and the ideals, the epistemic horizon of thought and sensibility, represented by that vague term "the Sixties" (really a blurry longer period from the mid- Fifties through to the mid Seventies, with its after-echoes and resurgences that  include postpunk, bliss-rock, and rave), they would say it was all illusion, all delusion. Unrealistic. The cultural superstructure to an unsustainable substructure of prosperity and growth fueled by cheap energy and big-spending governments dedicated to long term exploratory projects.  A bubble.

But for better or worse, it's been the wind beneath my wings, the energy that has propelled me through all I've done.  It's my make-up, my make-believe. Too late to get off that bus now.  The process of identity-formation is complete!

I do wonder what generative power the current "everything is a remix"/"nothing new under the sun" episteme will prove to have over the long term -  rooted as it is in an insidious downscaling-of-expectations, an implicit defeatism. Recycling might be sound and sensible, but it doesn't promise to be spectacular.


* Of course Melly is "wrong", in the sense that his insistence that pop is inherently anti-nostalgic and intrinsically forward-looking / present-focused would be disproved very soon indeed. His "country of Now" claim in Revolt Into Style is deployed again the section on trad jazz, which he argues was never  a true pop phenomenon, despite its exuberant energy and informality,  because a/ it wasn't the exclusive property of youth and b/ it was a a revival. But by the time Revolt gets into the bookshops, pop is deep into its own revival - the Fifties rock'n'roll revival -- proving that pop has an inherent capacity to fold back on itself, succumb to nostalgia for its own youth, the era of its emergence.  Melly didn't see that coming. (Nor did he envsion the "historical turn" represented by The Band, Fairport Convention, et al - where the past is not turned into a plaything, but is taken seriously).  Nonetheless I think Melly is right to identify the Now!ist, neophiliac, generative-not-reiterative side of pop's soul as its primary motor. Certainly the  righteous side of its soul, the side worth siding with.
^^^^^^^^^^^^^^
The full pages from Nik Cohn's Today There Are No Gentlemen 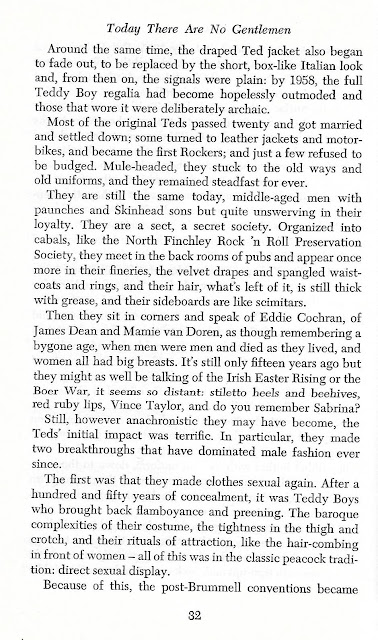 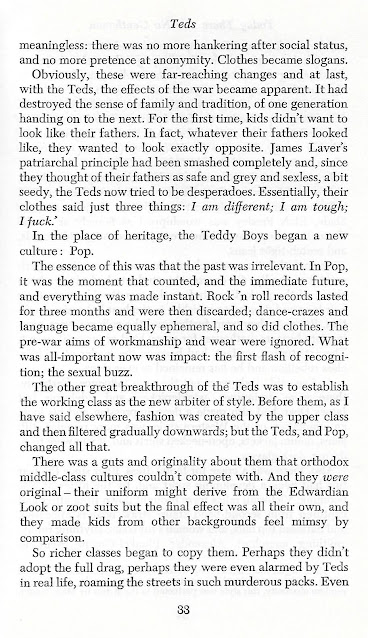 early sighting of the word 'retromania'

Posted by SIMON REYNOLDS at 10:42 AM No comments:

Email ThisBlogThis!Share to TwitterShare to FacebookShare to Pinterest
Labels: PRE-ECHOES OF RETROMANIA, THE WORD 'RETROMANIA'

How come I missed this? Last year Paul Weller only went and wrote a new song superimposed over my equal-first favorite Belbury Poly tune, "The Willows" - with full permission from and a publishing split to Mr. Jupp. It appeared on his solo album of last year On Sunset.

Unfortunately, despite good intentions, the outcome is ghastly not ghostly.  A shame after the rather good Weller EP on Ghost Box. Somewhere between conception and execution, it went awry, to put it mildly.