It was an intermittent anxiety from before I even started writing for Melody Maker - it crops up first in Monitor - and it would surface in various pieces over subsequent years. But the first concerted spate of fretting about retro as a crisis occurred in 1990. One prompt or pretext for airing the angst was the group Cop Shoot Cop, whose line of patter - "Smash Retro" - caught my eye when reading the NYC zine Chemical Imbalance. Their album Consumer Revolt didn't quite live up to the fiery spiel, but that didn't deter me from running with it, oh good Lord no. (Sometimes the primary value of a group - see also D-Generation, Consolidated, Manics for half-a-second -  is the way it injects ideas into the discourse, rather than fleshes those ideas out musically. ).

Here's the first review I did of Cop Shoot Cop for Melody Maker in November 24 1990, followed by a full-blown piece for Village Voice early the following year.

'BURN YOUR BRIDGES' is where Cop Shoot Cop proclaim their oblique intentions most plainly – their "anthem," if you will. "Know what you like/Like what you know," singer Tod A. intones with bleary, bilious disgust, before rearing up for the chorus: "Bite the hand that feeds you/Burn your bridges behind you." Gather your Byrds’ remastered CD box sets, your Big Star and Beach Boys reissues, and all the other fetishes that hold you in subservience to yesteryear, build a giant pyre and ignite the fucker. If you want to "live now," that is.

Cop Shoot Cop stand in stark contrast to the epigonic tone of ‘90s indie-rock (epigone: the lament of those who believe they live in a less distinguished, somehow "fallen" era in comparison with a preceding golden age). The (ad)vantage point of being able to draw from the treasure of 30 years of rock history becomes a paralyzing predicament; how to rival the incandescence of those who were able to make history rather than simply refer to it? An autumnal glow suffuses rock ‘n’ roll, from Galaxie 500 and the Replacements to REM and Teenage Fanclub: as "great" as these groups have been, all seem to bask in the glory of rock’s sunset, pine in its shadow. Even those bands who’ve reinvented rock rather than relieving us by proving that it can be as good as it used to be – the Sonic Youth of Daydream Nation, the Spacemen 3 of Playing With Fire – can produce a weird ambivalence: exhilaration at the vivid flashes of innovation, gloom that "our" music is condemned to volatilizing an established vocabulary.

So the hope then is that ‘90s rock can confront or at least apprehend the times we live in: an age characterized by media overload; by the inner city usurping Nature as the "dark continent" that inspires fear; above all, by a lack of the sense of a "time," "era," "zeitgest." Cop Shoot Cop’s determination to seize the time is declared by their instrumentation (where their peers follow J. Mascis in the search for arcane, outmoded effects pedals, CSC are almost alone in abandoning the guitar for the sampler) and in their aura (no wistful Jeffersonian longings for an idyllic pastoral America, rather an attempt to thrive on the wired energy of urban life).

Whether their music will live up to their ambitions isn’t yet clear. Although 10 times more forceful live than on the murky Consumer Revolt LP, they’re still in the preparatory stages, the awkward initial stirrings of a corrosive novelty. Jim Coleman uses his sampler as an armory of unidentifiable detonations and swathes of locust-swarming amorphousness, but still lags behind the tumultuous effects of the Young Gods (the only other group who’ve grasped the sampler’s potential as crucible of the new rather than as a "quote machine"). Cop Shoot Cop’s most original ideas are rhythmic. Phil Puleo’s scrap metal percussion frame provides a pulse of brittle insurgency; Tod and Natz’s twin basses agitate like rats sewn into your colon gnawing their way to freedom. At times, Cop Shoot Cop seem to be playing an avant-garde cousin of funk-metal; not slap-bass-happy and sinuous, but a metallurgical orgy of torques and vectors. Rather than being woven into a seamless piece of organic/harmonic fabric, Cop Shoot Cop songs are like intricate clockwork devices constructed from riffs and rifts that mesh with varying degrees of precision. "Noise" here is the friction that no mechanical system can eliminate. The stop-start, staccato dynamics deny the listener the forgetful bliss offered by the consensus rock of the day, creating instead the painfully awake and hair-trigger alert mind frame of the survivalist or urban guerrilla.

There are other, less interesting, strings to CSC’s bow. 'Suck City' is redolent of late-Birthday Party (with the concrete jungle as Nick Cave’s Faulknerian swampland), and the barrel-chested melodrama of 'If Tomorrow Never Comes' brings to mind the Doors’ morose version of 'Alabama Song'. But ultimately, Cop Shoot Cop partake of the very "purgative innovation" from which postmodernism was supposed to have provided both reprieve and escape route. Suddenly, we’re "back to the future." And herein lies the major problem for Cop Shoot cop: the simple fact that their discourse of Total Break and Absolute Renewal, shock of the new and shock of the now, has its own history. Ironically, they’re in a similar position to the postmodernists and retro-maniacs: they’ve an embarrassment of Futurist options and year Zeros from which to pick-and-mix – No Wave, or the 1979 British postpunk vanguard, or Einsturzende Neubauten, or early Swans/Sonic Youth.

Cop Shoot Cop are fully aware that every grand gesture of severance and repudiation has been preempted, every manifesto of cultural patricide already unfurled. At CBGB last Friday night, they found themselves agitating for change in an age and a scene that’s seen way too much and is way too cool to be mobilized. Their response oscillated violently, from desperation (Natz prefaced 'Smash Retro' by haranguing the impassive Lower East Siders sitting quietly at tables: "This is not your living room, I am not your TV set") to self-mockery (Tod: "How to become your own self-parody in 10 easy lessons"). I can share their anguished awareness of the pathos of living in a "late" period; perhaps "nostalgia for the future" is the least dishonorable option these days. And Cop Shoot Cop deserve credit for putting the problem of boredom – the specter that lurks beneath all our pleasures and plenty – back on the agenda.

Oh and a little before, another live review for Melody Maker, rehearsing some of the same lines and ideas: 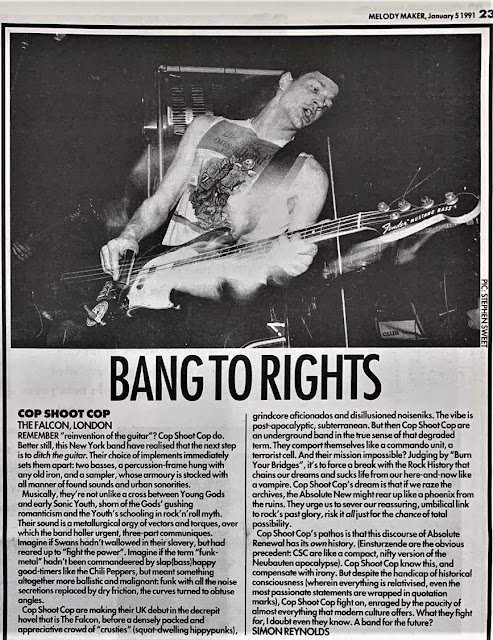 Posted by SIMON REYNOLDS at 2:08 PM