"No, I Do Not Want to Hear the New Stuff" 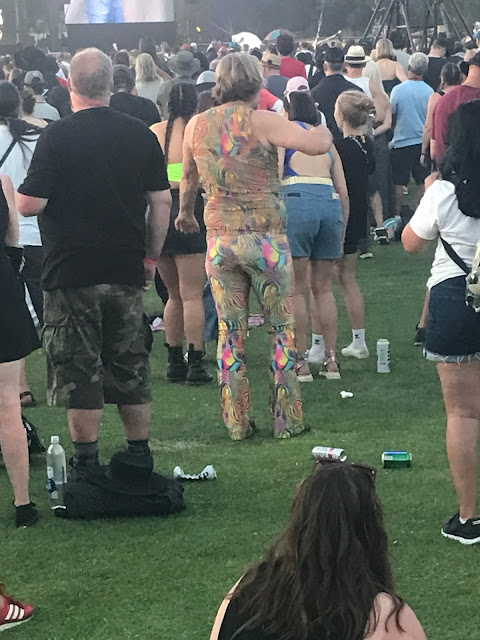 Did something unusual - and retromaniacal - a few weekends ago: went to Cruel World, a gigantic out-doors convocation of aging Goths and alt-rockers, just up the road (in LA terms) in Pasadena. We -  me + the missus + our 16-year-old + his friends + their parents - went on the first of the two days, the Saturday, baking and squinting in the 90-degree-plus heat and glare as a succession of all-star, largely British legacy acts performed.
For me, the prime attraction was the first-time-ever sighting of Public Image Ltd and Devo in the flesh (albeit rather far off and mediated by the giant videoscreens, in practice). And also the first-time-in-over-30-years sighting of Morrissey. He and Lydon (another Irish Blood, English Heart icon-gone-to-rust) have been towering figures in my mental landscape since I was  more or less the age of our son. But they have subsequently clouded their eminence through drifting to the wrong (right) side of the political spectrum. I was curious as much about the mixed emotions they would trigger as the extent to which they could still deliver live. 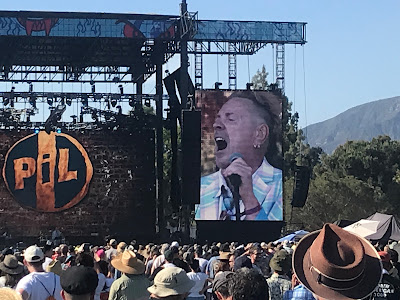 I was also excited to hear The Beat (billed of course as The English Beat, gah!), another much-loved group I never saw back in the day; rather intrigued to witness Bauhaus; and mildly curious about Blondie.  (There had been rumours that Johnny Marr, who had been playing in this legacy incarnation of Blondie, might conceivably later stride onstage with Morrissey, creating a semi-Smiths reunion. But in the event it seems that it was Glen Matlock who guitared with Debbie Harry et al). Had been psyched to resee Echo & the Bunnymen, but they had to pull out.
Although there were quite a few young people - Morrissey and some of the others on the bill being the kind of cult figures that pick up new fans with each generation of maladjusted and mope-minded - it was a largely middle aged and even old aged audience. Indeed I saw quite a few people who were infirm, getting around in those little electric buggies that the morbidly obese or otherwise mobility-impaired use. And although most people were hydrating themselves at a sensible rate and sheltering under parasols, I did see one septuagenarian-looking geezer carted off prostrate on a motorized stretcher, seemingly having  succumbed to heatstroke, or worse. (When I got home myself I had all these strange aches in my arms  and discovered that this is a symptom of dehydration).
The artists themselves looked like Time had taken its toll. Dave Wakeling was a bit ragged vocally and as for Ranking Roger - well, of course, he sadly wasn't there, subbed for by a younger, fitter and aliver surrogate who did a solid job as chatter and compere.
Talking of missing persons, Missing Persons kicked ass like the all-American rockers turned New Wavers they were and remain. Although I think Dale Bozzio may be the only original member left. Her profuse thanks and love to the audience felt sincere and heartwarming.
In between the acts, it was fun spotting the alt-tribes - Goths of several generations who determinedly turned up clad in layers of black garments, defying the sun to do its worst; Latin lovers of Moz;  portly punks and Anglophile Angelenos. Some, less aligned with the alternative than with New Wave, wore T-shirts declaring their allegiance to MTV (or more precisely, the Brit Invasion enabling MTV of the '80s, rather than whatever it is nowadays).
My favorite T-Shirt that I spotted - and it may well be a self-printed original, as I can find no trace of it on the internet -  was stretched tautly across a beer belly and read: "No, I Do Not Want To Hear the New Stuff".
I chortled inside at the sight of that: retro-consumerist bad faith proclaimed with pride. No future for you, beloved band of my youth: just keeping playing the old songs, forever!
But of course, when it came to it, I had scant interest in hearing the newer material either.
Indeed, I wasn't much interested in the older stuff that wasn't the favorite or best-known stuff.
The Church, for instance - absolutely wonderful for the duration of their two top tunes and emteevee regulars, "Reptile" and "Under the Milky Way" - but the rest was a bit of a ragged snooze. 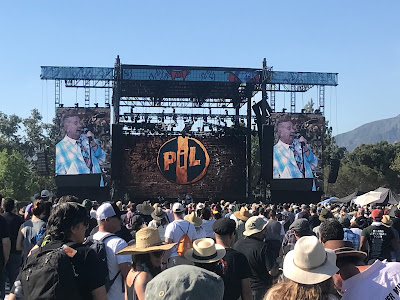 And then there was PiL, who I never saw back in the day. Lydon, or Rotten - not sure what he goes by these days - was in surprisingly operatic voice, hamming it up inimitably. I had minimal expectations, anticipating a set that drew heavily from the later undistinguished PiL records. But "Public Image" was a thrill and "Death Disco", amazingly, absolutely seared, the stand-ins doing a very decent job in lieu of Wobble and Levene. "Rise" also was a treat.
Only a brief valedictory barb about being very much "awake, thank you very much" hinted at the Brexit-and-Trump supporting Johnny of recent times. 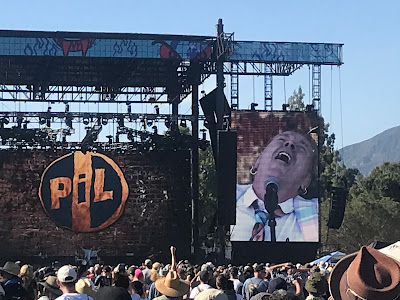 The next highlight was Devo. Again, a group I never saw before. Their debut album is something I play often - simply one of the best and most original rock albums of all time, purely on the level of riff and rhythm, with all the ideology and sick humor and grotesque imagery almost functioning as a bonus, to be attended to or ignored according to preference.
At first, my heart sank as the set-up was the Freedom of Choice-onwards synth-dominated sound - Gerald Casale (who seems to have shriveled up haha with age) on keyboards. The delivery was slick, potent, synced to video projections, but a bit sterile, and "Whip It" aside, not their best material by a long shot. 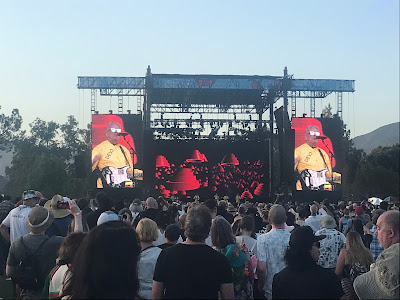 But then halfway through they went off and came back again in yellow clean-up squad suits as the guitar-powered Devo of Are We Not Men and Duty Now for the Future - Casale wielding a bass guitar. And this was every bit as exciting as you could hope for, if still a little regimented / professional-entertainer in vibe. 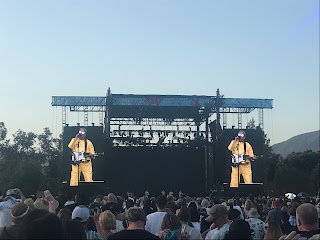 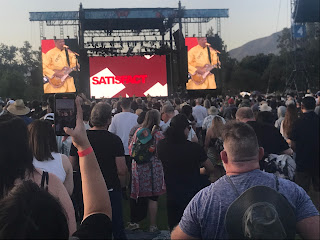 (I was a little surprised they played "Mongoloid", though). 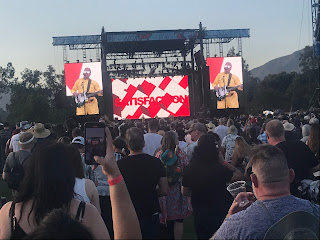 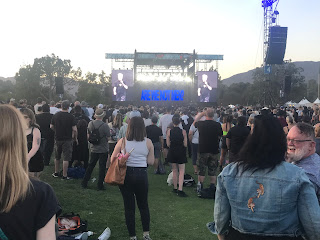 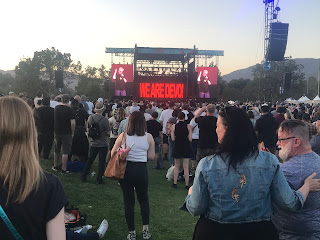 A glimpse of Psychedelic Furs, who I only ever saw before at another New Wave retro lineup at the Hollywood Bowl, on a bill with Bow Wow Wow and The Go-Gos, about seven years ago.
Then it was Bauhaus at dusk - as seemed only right and proper, given the issues with vampires and daylight. Peter Murphy's bald dome + beard-with-twirled-mustache seemed like a gracious way for a Goth beauty to age out, and the walking cane makes for a good performance prop, even if it's actually physically needed for support with the advancing years and wear and tear of injury, which it may well be. Daniel Ash, whose hair and white-frame sunglasses made him look like a cross between a Buggle and a bandicoot caught in a wind-tunnel, churned up an impressive barrage of gnarly guitar. The expressionist lighting was excellently atmospheric. If much of the material seems as histrionic and affected as ever, when they played the killer singles - "She's In Parties", "Kick in the Eye", and especially "Bela Lugosi's Dead" - I happily conceded they are a great entertainment.

And then there was Morrissey. 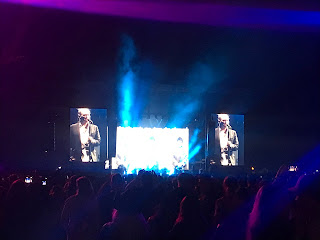 The first surprise was what fine voice he was in. Perhaps amplification at large venues has improved, or there have been advances in sound mixing from when I saw the Smiths back in the day, or - the last previous time - at his first solo concert in Wolverhampton in the winter of '88. But judging by what I heard, Morrissey has never sounded better as a singer.
Such a pity that so many of the songs sung were shit songs, from the string of solo albums this millennium.
But it wasn't just the likes of "The First of the Gang to Die" (which, having heard some of its competition out of the last 20 years output, I can understand finally why fans rate it highly - it's the closest to an actual tune out of any of them) or brand-new nothingnutburger single "I Am Veronica".  Some of the duds came from the '90s, like obscure B-sides (C-sides more like) "The Loop" and "Jack the Ripper", or "Alma Matters" (from Maladjusted). He even exhumed "Ouija Board, Ouija Board".
The response of the crowd was flatter than I'd expected, suggesting that they shared my preference for - not so much older material (since some of what was heard was 30 years old) as the old-and-great stuff.
When he did play fan favorites ("Suedehead") or sublime "deep cuts" (like "Little Man, What Now" off Viva Hate, or "Half A Person", a Smiths B-side that is a triple-A side compared to the last quarter-century's output), it was wonderful.
But it didn't manage to outweigh the effect of the disproportion towards mediocrity in the set.
It wasn't just the material chosen, though. It was Morrissey's between-song quips and barbs, so opaque and archly unreadable in tone. And then the images and video loops that punctuated the songs - largely unrecognizable to almost everyone in attendance, I should imagine (I would hazard the "Ouija" image was of Doris Stokes but who knows? Certainly few in this audience). Figures from Morrissey's private (too private) pantheon of obscure film, television and stage crushes.
The set ended abruptly, with no encore (seemingly a Cruel World policy with all the groups, but particularly anti-climactic for the headlining, night-closing act) and instead this bizarre, disturbing video loop of a Japanese man blowing his brains out (whether real or some kind of Aktionist art stunt, who knows?). For sure, the event was called Cruel World, a mope-rock  joke sustained with the three stages dedicated respectively to Lost Boys, Sad Girls, and Outsiders, but even in that self-mocking context it felt grim and unpleasant to end with suicide. Triggering, even.
The crowd spilled out into the night, passing through the circle of hot-dog vendors who had set themselves up immediately outside the venue (a meat-free zone by edict of Moz).
In Retromania, borrowing Svetlana Boym's opposition between reflective nostalgia versus restorative nostalgia, I describe Morrissey as pop's "supreme poet of reflective nostalgia", an artist who finds perverse fulfilment in "the bittersweet pangs of poignancy", treasuring the feeling of being an exile in time, at home nowhere and nowhen. But I also acknowledge that Morrissey has sometimes trespassed  into "the restorative nostalgia danger zone", harking back to outmoded notions of insular nationality, succumbing to the delusory belief that things actually were better back in the good old days.
Well, since writing the book, he's decisively gone over to the other side of the "Make ____ Great Again" divide.
Yet for all the obnoxiousness of his opinions, I'm not sure I could ever renounce the old songs - meaning, mostly Smiths, plus half of Viva Hate, "Seasick But Still Docked" and "I Am Hated For Loving".  This music is too entwined in my fibres.
It's hard to believe that someone capable of creating something as beautiful, kind, and wise as "Accept Yourself" could endorse For Britain.
But probably we all have relatives, or old friends, who have drifted over to the loony right. Become cranky and conspiracy-minded with age. And you can't amputate from memory the times you had with them. They are part of you. That's why it's painful.
Posted by SIMON REYNOLDS at 4:01 PM