Got a surprising amount of time for Noel Gallagher -  as a rentagob / motormouth (and you can't deny "Champagne Supernova" or "Live Forever", a few others). (He also looks a bit like my Uncle Geoff which makes me warm to him).

But I did have to chuckle, and not in sympathy, at this riff from the Esquire interview, in which he talks about knowing all along that Oasis would be The Last of a Dying Breed, and rants at the pusillanimous professionalism of modern rock :

"They don’t want someone like Ian Brown in their offices, or Liam, or Bobby Gillespie, or Richard Ashcroft, or me. They want professionals. That’s what it’s become now.
"I guaran-fucking-tee you this: The Stone Roses never mentioned “career” in any band meetings. Ever. Or Primal Scream, or The Verve. Oasis certainly never mentioned it. I bet it’s mentioned a lot by managers and agents now: “Don’t do that, it’s bad for your career.” “What? Fuck off!” Like when we went to the Brits and we’d won all those awards and we didn’t play. The head of the Brits said, “This’ll ruin your career.” Fucking, wow. I say to the guy, “Do you know how high I am? You know who’s going to ruin my career? Me, not you. Bell-end. More Champagne. Fuck off.”
"Ten years ago, I said we’d be the last. I just felt it. I felt that story, the poor boys done good, which was retold from Elvis through The Beatles – we won’t mention The Stones because they’re posh kids – Sex Pistols, The Smiths, The Stone Roses, I felt at the time we were the end. And I’ve been proved right. And I don’t like that. I mean I love being proved right but not in that case."

As if Oasis et al weren't following a bleeding script written for them a couple of decades before  (and in some cases following it consciously, and wanting you to know that: hence that old ad "Primal Scream - know what I mean" featuring Keith Moon) 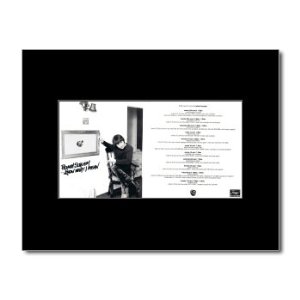 Noel gets near to grasping this a few paras later in in the interview when he says that rock'n'roll is about freedom and honesty - saying "you have a duty" to be those things. Exactly: that's the job description of ye olde rocke & rolle.  That's the designated role: being irresponsible, random, impulsive. That's what you're enlisting in, when you signed up for rock'n'roll. It was well established modus misbehaviourus by the early-mid Seventies; a hoary, encrusted tradition by the time of Sunset Strip metal and G'n'R; and God knows what it was by the time Oasis lurched into view. (By the time of Kasabian and the Libertines it was what Phil Knight, via Spengler, calls pattern-work - ritual reiteration of something whose original point is lost to immemorial antiquity).  Whatever edge that sort of not caring about anything / living in the moment / unbridled rapacity / wrecked recklessness / radical selfishness  had at a certain historical juncture has long, long gone. Probably it ceased to mean anything by 1974. (That was why Eno, for instance, regarded The Rolling Stones as the absolute opposite of what he was about).

Rather than being proud about being the Last of a Dying Breed, wouldn't you rather be the first of a new breed?
Posted by SIMON REYNOLDS at 1:45 PM