"...  it is becoming clear that something is cresting the horizon, and while it's too early to make out the particulars of its shape—this lumbering behemoth with the Teflon gleam and Transformer joints and image-mapping skin—it is getting closer.

"This new thing is not a genre, exactly; call it a style, a sensibility, a veneer. It has to do with computers and digital sound and digital imagery. It has to do with representation and malleability, the idea that sound and image can be stretched and twisted and copied ad nauseam. It revels in digital gloss and grit, in bent tones, in smeared and frozen reverb tails. Extreme compression, schizoid pith: rap vocals broken down to monosyllables, a single "Huh" as metonym for everything that's happened between the Sugarhill Gang and now. History reduced to a USB stick.

"It's not necessarily sci-fi in its themes—not, say, in the way that Detroit techno celebrated cybernetics and space travel—but there's still something inherently futuristic about its portrayal of technology as something tangible and even sensual, its suggestion that data has texture and heft. It spins code into a second skin... You can make out its traces in the work of people like Actress, Oneohtrix Point Never, Evian Christ, FKA twigs, Berlin's Janus crew, and even PC Music, and it feels like it's coming to a head on Arca's Xen. The next few years—his next few years—are going to be interesting."

Feels like this has been coming on for a while  -- like this is a sensuously noir branch of digital maximalism - neugothromanticism.  It overlaps with the Harperzone, the hinterland of IDM 3.0 (IDM now meaning Internet Dance Music), things like "Distroid" and the new Coldness/Darkness (confusingly coexisting with the New Cuteness/Brightness)

Is this the same sort of thing - imploded, overloaded sensations of future-now dysphoria and disequilibirum - that Kid Shirt is talking about here, in relation to music by Krakkkbot?

Interesting to meditate on how the stripped-down, lean, 16-step sequencer linearity of, say, DAF or Nitzer Ebb gave way over 30 years or so to...  electronic musicforms like this: fragmented / restless / self-interrupting / auto-sabotaging / deliberately 'broken' -- disruptive, rather than *errm* discoursive - music that reflects the jarring, multi-channelled. corporatised ADDH culture that demands our attention from every which way but forward at the same time. We sit daily at the centre of a sphere of influences / adverts / tugs on our times / pleas for attention / earworms / etc, one that also reaches back in time and across shared temporal geographies. Music technology played a part in this migration, obviously, but so did cultural fragmentation and the multiplication of media-streams.

Trying to work out why this latest iteration of "digital baroque" doesn't do much for me....

Well of course I didn't much care for this sort of quasi-organic infolding and slithery convolution, this lush plasticized foliage, when it was writhing triffid-like off of  Lifeforms by Future Sound of London...  the attendant rhetoric of digital-virtual mestiçagem does feel like the re-irruption of  90s Zeroes & One discourse.... where topiary and Toop merge...

(and just as the omni(virous)sound has been coming on for a while, similarly that discourse has been re-irrupting since 2008, 2009 - remember wonky?)

the non-attraction has something to do with the reasons I prefer collage and analogue-era animation techniques (models, cel overlay, zerography etc) to morphing, Pixar, CGI etc

stop press: a review of Xen  that strikes me as spot-on, by Maya Kalev at FACT  - the gist is "remarkable – but ultimately insubstantial" , "unusual" but not "emotionally affecting", "self-consciously hypermodern" yet often oddly recalling Autechre, IDM, trip hop, illbient. And the word "baroque" also crops up, interestingly.

The opening bit - referencing an interview where Arca says that "Xen" is "a genderless alter ego, a fictional entity that he describes as 'kind of repulsive and attractive at once, and so I imagine her under a spotlight, in this room full of people just staring, wide-eyed, openmouthed'" -  indicates what is new that's been added to the otherwise 90s digital-virtual hybridity rhetoric, which is queer theory 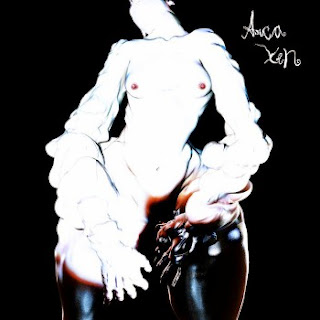