getting the future wrong, #2

#1 was this post on Anthony Burgess's 1985, a clumsy satire of a trade union dominated Britain of the near future

in similar vein, the 1977 series 1990, set in a bureaucratic dystopia (creator Wilfred Greatorex called it "Nineteen Eighty-Four plus six") 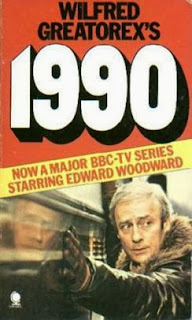 The blurb at YouTube: A nightmare vision of the (then) future UK set in 1990. The permanent civil service in Britain has taken political control and the population finds itself living under a totalitarian regime. The Public Control Department (PCD) of the Home Office monitors all activity, and ruthlessly suppresses any act of opposition. The story focuses on two key players -- the supercilious Permanent Secretary at the PCD, Herbert Skardon (Robert Lang) and a journalist on Britain's last independent newspaper, Jim Kyle (Edward Woodward).

(More on it here)

Laughably off-base, did they really not see Thatcher coming?

Blimey, there appears to have been a second series.

Wilfred Greatorex - what an awesome name!

Posted by SIMON REYNOLDS at 6:52 PM