the Eighties that never happened

The second, which I've just finished rereading for the first time since the book arrived at Berkhamsted Public Library, is based on the premise of updating Orwell and projecting forward from the present Burgess observed, as socialist-reverted-to-his-upbringing's-Conservatism, i.e. the industrial discord and class warfare of the dis-United Kingdom of Seventies, to a Britain of the then near-future in which the TUC has won and dominates the nation (although it faces a rival in the form of oil-rich Muslims buying up the country).  The result is a bad novel - bad both as a novel and as science fiction --  that is just about worth revisiting as a historical curio: a symptomatic sliver, a tissue sample, of the mindset that led to Thatcher's victory in 1979 (a year after the book's publication).  A sort of Punch readers's dystopia, although the term preferred by Burgess, the inveterate linguist / pedant, is "cacotopian."

The first part of 1985, which I'm a little way into, seems a lot better than the second: it's a long critical essay on 1984, full of fascinating insights and observations (if ultimately wrongheaded in its insistence that 1984 = 1948).

Actually 1985 is a book in two and a bit parts, because there's also the Epilogue, an interview between Burgess and an imaginary interlocutor, with some interesting thoughts about future fiction versus futurology versus future shock, and some speculations about the shape of things to come, some quite on the mark and some well off it. 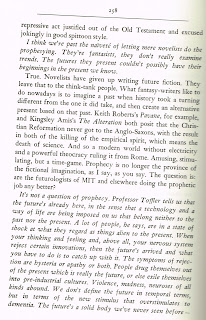 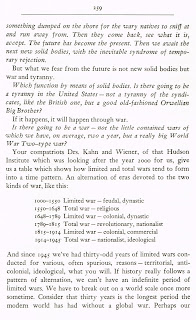 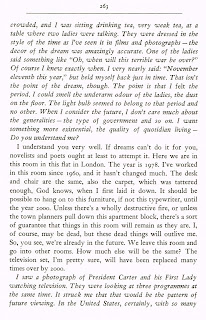 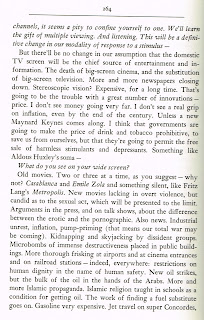 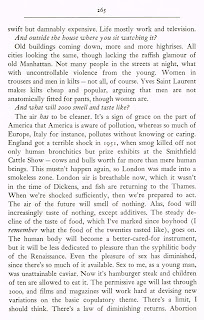 Posted by SIMON REYNOLDS at 8:54 AM