Kurenniemi body out there? (so suomi)

One of the things I was really pleased to squeeze into Retromania was a bit on Erkki Kurenniemi - the Finnish futurist polymath who from the 1960s got involved in a whole range of experimental electronic endeavours involving computers, robotics, music, film and much more - and who had a great documentary made about him, The Future Is Not What It Used To Be by Mika Taanila

So imagine my delight, a few years ago when I made a trip to Finland to stumble quite accidentally on a retrospective exhibition of Kurenniemi's work in multiple media being staged at a big art museum in Helsinki.

Further increments of delight have now occurred with the news that a collection of essays about Kurenniemi is being published by the MIT Press - Writing and Unwriting (Media) Art History: Erkki Kurenniemi in 2048, edited by Joasia Krysa and Jussi Parkikka. 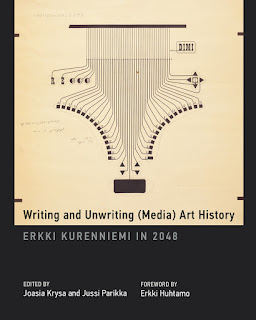 "Over the past forty years, Finnish artist and technology pioneer Erkki Kurenniemi (b. 1941) has been a composer of electronic music, experimental filmmaker, computer animator, roboticist, inventor, and futurologist. Kurenniemi is a hybrid—a scientist-humanist-artist. Relatively unknown outside Nordic countries until his 2012 Documenta 13 exhibition, ”In 2048,” Kurenniemi may at last be achieving international recognition. This book offers an excavation, a critical mapping, and an elaboration of Kurenniemi’s multiplicities. The contributors describe Kurenniemi’s enthusiastic, and rather obsessive, recording of everyday life and how this archiving was part of his process; his exploratory artistic practice, with productive failure an inherent part of his method; his relationship to scientific and technological developments in media culture; and his work in electronic and digital music, including his development of automated composition systems and his “video-organ,” DIMI-O. A “Visual Archive,” a section of interviews with the artist, and a selection of his original writings (translated and published for the first time) further document Kurenniemi’s achievements. But the book is not just about one artist in his time; it is about emerging media arts, interfaces, and archival fever in creative practices, read through the lens of Kurenniemi."


here's my bit from Retromania for your further enticement and edification:

...  Imagine a Finnish hybrid of Stockhausen, Buckminster Fuller and Steve Jobs--who from the 1960s onwards was a pioneer in electronic music, computing, industrial robotics, instrument invention, and multimedia. Short of presiding over Finland's space programme, he was involved in every aspect of the Future.  Rediscovered and championed by the Finnish techno outfit Pan Sonic, Kurenniemi's clangorous bleepscapes such as "Electronics In the World of Tomorrow" (1964) compare favorably with the avant-classical creations emanating from Paris and Cologne during that time. He was also something of a techno-prophet, talking in the voice-over to 1966's "Computer Music" about how "in the 21st Century people and computers will begin to merge into hyperpersonas. It will be hard to say where man ends and machine begins."

The documentary-- made by director Mika Taanila....  also looks at what became of Kurenniemi in the twilight of his career.  Grey-bearded and careworn, the aging innovator spends most of his time documenting himself. He takes 20 thousand pictures a year, which are carefully touched-up and filed on his computer. He inputs "cassette diaries" he made during the Seventies and records new ones detailing the minutiae of his existence, like the good steak he enjoyed courtesy of a friend.

Why?  Kurenniemi believes that medical advances will virtually eliminate mortality in the not-too-distant future. "Mine is probably the last generation of mortals".  200 years from now, when the greater part of humanity lives off-world, in the asteroids or orbital zones, while the Earth is "a museum planet", he believes that the indolent immortals, confronted by "100, 000 years of uneventful life" and "with nothing else to do but study old archives", may be "genuinely interested in reconstructing the 20th and 21st centuries."  Kurenniemi's "manic registration" of every trivial detail of his life is intended to provide the "core material" for this resurrection project.  In the near-future, it will be possible to do "brain back ups", to download consciousness and personality into a computer. But Kurenniemi  can't count on lasting that long. So, he advises, "we just have to keep every tram ticket and sales slip, and write down or record all our thoughts." Video would make for a better imprint of his consciousness, a document of the world seen through his eyes, but it's impractical; the still snapshots will at least provide a "jerky account". He plans on doubling his current rate of 100 pictures a day.

Erkki Kurenniemi's journey from future-minded visionary working at the interface of science and art, a fresh-faced young man who pioneered computers and robotics and kept one bright eye always on the stars above,  to the haggard and slightly potty sixty-something frantically collating the remains of his days for the benefit of some future race of curators,  strikes me as a perfect parable for our times.