The Ministry of Nostalgia

Owen Hatherley's got a new book out, The Ministry of Nostalgia: Consuming Austerity 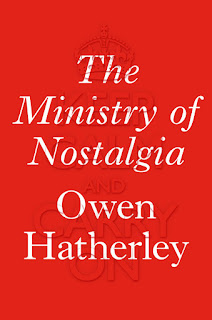 It sounds fascinating - as usual

The blurb at Verso:

Why should we have to “Keep Calm and Carry On”?

In this brilliant polemical rampage, Owen Hatherley shows how our past is being resold in order to defend the indefensible. From the marketing of a “make do and mend” aesthetic to the growing nostalgia for a utopian past that never existed, a cultural distraction scam prevents people grasping the truth of their condition.The Ministry of Nostalgia explodes the creation of a false history: a rewriting of the austerity of the 1940s and 1950s, which saw the development of a welfare state while the nation crawled out of the devastations of war. This period has been recast to explain and offer consolation for the violence of neoliberalism, an ideology dedicated to the privatisation of our common wealth.In coruscating prose—with subjects ranging from Ken Loach’s documentaries, Turner Prize–shortlisted video art, London vernacular architecture, and Jamie Oliver’s cooking—Hatherley issues a passionate challenge to the injunction to keep calm and carry on.

On Billy Bragg versus ABC:

"I think songs like ‘Between The Wars’ probably helped put more people off socialist politics in the 1980s than anything… it just painted it as a weird revival society; a sort of constructed folk culture. The covers of his records in this period were actually one of the first instances, I think, of austerity nostalgia.... Look at the cover of Life’s A Riot, based on that Penguin Books grid. No one would have done that in the Seventies or the Sixties; it would have made no sense. It evokes a whole world of working class self-education, comprehensive schools, the London County Council... Probably because I come from quite a Billy Bragg world, I always found ABC’s way of doing things much more subversive. I find authenticity really uninteresting as a cultural thing. At the same time I find lots of those [Bragg] songs quite moving. They’re songs I grew up with. They speak about things I think are very important. My dad had all those records. And Life’s A Riot was great; it’s mostly love songs. There’s something in it that I really distrust, and at the same time it speaks to me very directly. [Me and my Communist parents]’d go down to the Tolpuddle Martyrs’ Festival every year, and it’s like a fucking revivalist society. Everyone tags along, older every year, has their pint from the Workers’ Beer Company and watches Billy Bragg."
On Left nostalgia:
"I can’t think of any time in which the Left has ever successfully managed to own the past, and made into a successful project. Every time the Left has done well in Britain, whether it was 1945, or 1964 under Harold Wilson, or Tony Blair, it was with modernity. And with an appeal to optimism. Because that’s what socialism is. Lots of stuff in this book comes from reading Patrick Wright’s On Living In An Old Country, which was published in the early 80s. And his target is Tony Benn. Politically he was pretty much on the same side, but there’s a critique of Benn’s mood music. You cannot appeal to a memory of socialism, because we’ve never had it. All you’ll end up appealing to is a memory of failed struggles."
On Corbyn and the Eighties revival / "tribute band" slur
"I think Corbyn is way less retro than the Labour Right. Compared to someone like Jon Cruddas or Tristram Hunt, I think he’s much more forward looking.... The impression I get is that his support mainly comes from people who are over 55 or under 30. People who either remember the welfare state, or have never had anything to do with it whatsoever. All the people in between – the New Labour people sitting on hugely expensive houses in Islington and Edgbaston - that’s the people that don’t get it. So you have this weird alliance of the old-school Labour Left, which had I considered long dead, the Bennites, and these young people for whom I imagine the Durham Miners’ Gala is meaningless. It’ll be difficult for Corbyn, because most of those young people are not yet in a position to be in Parliament. And you can see this factor really majorly with... people who are mostly about my age, who are saying, what the hell is this? They just do not understand it. They see it purely as retro, and I don’t think it is. I think many of Corbyn’s instincts are quite Spirit Of 45, and the Bennism he comes out of was often quite nostalgic. But his support base isn’t."
On hauntology and it being high time to move on:
"Seven or eight years ago, it seemed like a very interesting furrow. The notion that, if you subtract pop from the post-war era, what do you get? And actually lots of the argument of this book is that what you get is – this. It seemed a really interesting thing to do, particularly in the last years of New Labour, the horrible decadence when it felt devoid of the slightest ideas. Ghost Box seemed like a fun way of living your life in a particular kind of bubble. And my life at that point revolved around hanging out in old 50s cafes, going off to look at [Brutalist] buildings like this one before everyone realised that buildings like this one were good."
On the aestheticisation of Brutalism as cult cool fetish missing the point completely - these are places to live
"It was really telling that the Aylesbury Estate in Southwark became a cause celebre, because it was a nadir architecturally. But people were squatting it and trying to save it, saying, we want it to be social housing, leave it alone. Rather than appealing to it on the basis of architecture, it was on the basis of it being useful."