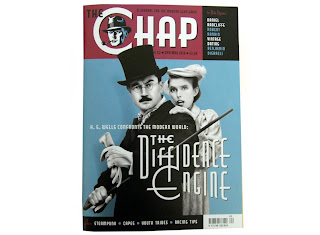 a standard option on the menu of life-stances

the one-person timewarp cult, pursued to varying degrees of strictness or extremes

and with any number of motivations and angles

for instance there's those downtown NYC artists David McDermott and Peter McGough, who were a sort of steampunk Gilbert & George -- from 1980 to 1995, they "dressed, lived, and worked as artists and "men about town", circa 1900-1928: they wore top hats and detachable collars, and converted a townhouse on Avenue C in New York City's East Village, which was lit only by candlelight, to its authentic mid-19th century ideal. " that's like performance art that never stops or that subsumes one's entire existence 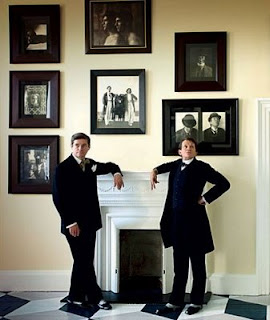 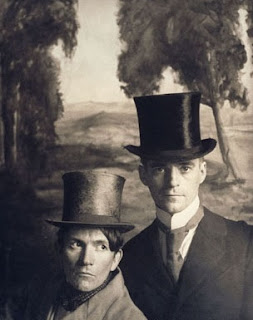 but then I think also of one of my best friends at school, who around the age of 17 began to affect the manners of an old man... to the point of carrying a walking stick... I remember one time we went for a walk through some country meadows and as he levered himself over a stile, he complained "I'm getting too old for this, Simon".this might have been a protest against the perceived fatuities of youth culture (of the kind I and everyone else we knew were so deeply engaged with) but also had, I think, something to do with opting out of the sexual race (he was no oil painting, let's leave it at that).

then later here was a fellow student who alone of our  Brasenose History class dressed in tweedy stuff (dressed like his father, I should imagine). But in this case the style was congruent with his Tory politics. His tweed jacket, with the leather padded elbows, sported on the lapel a little badge that declared: Nuclear Power - Yes Please! Whether that was because a non-coal based source of electricity power would undermine the power of the National Union of Mineworkers, or because he just enjoyed going against the standard lefty-green position on nuclear power stations, I know not...

that look is not the same as, but similarly related, to the Sloane Ranger look as analysed by Peter York: dressing in the city like you are about to go tramping around your country estate with a shot gun crooked in your elbow
Posted by SIMON REYNOLDS at 1:15 PM