"sometimes the presents seems so dated!" / retro in comix

retromaniacal tinge to this funnie

reminded me, rather tangentially, of this Dan Clowes strip about a timewarp cultist who lives in a perpetual 1966 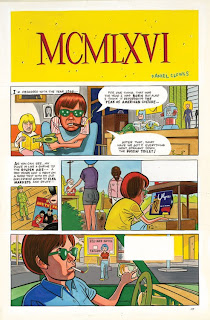 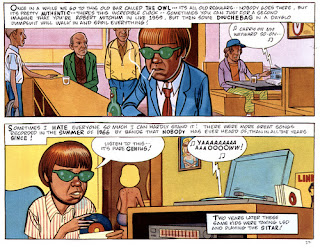 Thinking of Clowes's work, reminded me that I have some disordered and unformed thoughts about why it is that the dominant mode in comix, cartoons, illustration is  retro.

because  it is, isn't it? Go into a place like Wacko in Los Feliz, LA, and everywhere you look you see new work done in old illustrative and graphic art styles.... vintage fonts and typography and lettering...  campy Googie-era Fifites here, Gothic American there, B-movie psychotronic trash kultur etc

is it because, being as close to the world of craft as Art, the illustration/comix world is less hung up on modernist precepts?

But most of the comic/cartoon/illustration styles being reworked or drawn on, in their own time, would have been innovative, presumably?

Here's a little thing I did on Daniel Clowes's Caricature collection (whence the 1966-dude strip comes from) for Village Voice Literary Supplement.


Cartoonist Daniel Clowes's stories are set  in some  all-American twilight zone of Hopper-esque diners, lugubrious motel rooms and desolate streetscapes. Time and place are deliberately left non-specific--it's the Big City, any-postwar-year-- allowing Clowes to indulge his fondness for  the kind of quaint furnishings and appliances (e.g. barber's chairs) that now sell as overpriced antiques in  "architectural salvage" stores.  Some of the stories in Clowes' new collection Caricature veer into the full-on noir surrealism of  Like A Velvet Glove Cast In Iron  (his famous Twin Peaks-like serial driven  by non-sequiturs and a mystery narrative that never resolves itself). But most develop further the seedy realism of  his superb 1997 graphic novel Ghost World,  conjuring a world that's all the more uncanny because the blatantly supernatural rarely occurs. Caricature's most poignant stories seem autobiographical:   brink-of-puberty vignettes "Immortal, Invisible" and "Like A Weed, Joe", and  "Blue Italian Shit", a memoir of life as johnny-come-lately punk at the tail end of the Seventies. From the title story's fairground caricaturist to the decrepit  cartoon superhero in "Black Nylon" and the pugnacious epigone in "MCMLXVI"  (who believes American culture peaked circa 1966) Clowes's forte is stalled lives and blocked dreams. Nobody  can rival him when it comes to the physiognomy of anomie--he's  a virtuoso at jaded eyes, non-commital mouths, and the myriad facial nuances of affectlessness.


And here's theVoice piece by me on Ghost World the movie, which features quotes from Clowes as well as Terry Zwigoff, and has that whole retro-pathos subplot of the 78 rpm platter collector scene, the choleric Seymour character added gratuitously and largely eclipsing the Enid-Rebecca relationship.
Posted by SIMON REYNOLDS at 10:24 AM