further to the Omni era / retrofuturism post, Jean Michel-Jarre is interviewed at Resident Advisor and is asked why it is that so many electronic musicians are looking back, c.f. his own time when they were all looking forward:

"We are still at the beginning of the 21st century for lots of different reasons—I think we are slightly frightened about the future, so we are looking backwards. That is partly due to the fact that for a long time we were looking at the year 2000 as a kind of final frontier. The people from the '60s, '70s and '80s, in cinemas, in literature, in music, everywhere—they had a vision of the future, and they thought that after 2000 everything would change; you know, cars would fly and we'd all go to the moon for holidays! Then the year 2000 came and went, and nothing special happened, so in a sense we lost our vision of the future.

"Now I think we have to re-create a kind of dream for the future. In that sense, electronic music can help. But today that state of electronic music is a sign of the times: people are looking backward and having this vintage approach to day-to-day life. Having said that, I think technically, all digital instruments, such as the Animoog on iPad, are really bringing something new. For quite a long time, the quality of the digital era was not there, it was still quite harsh. There was this lo-fi world, not only for sound, but also for visuals. It's only been over the last three or four years that we've been re-entering the world of high definition sound, and that's going to change a lot in terms of the kind of music we produce in the coming years....

He also had this to say about digital facilitation and the DIYstopia:

"I think the next step is not going back, but to restore the idea of the fact that when you really want to play the piano, violin or guitar properly, it takes a certain amount of time. Technology made a lot of people think that you can make a decent track with instruments you learned the week before, which is obviously not true. For quite a while, then, you had lots of music that was not that bad, but not that great, and not personal or particularly unique. And for every gem, you had a thousand decent tracks that were nothing special."


You studied with musique concrete pioneer Pierre Schaeffer in the Sixties - how did you make the progression from avant-garde classical abstraction to highly melodic and accessible music?

JMJ: I trained in classical music, true, but I was also in rock bands at the same time. Schaeffer is the godfather of electronic and sample-based music. From him I took the idea that the crucial thing is not notes or harmonies, but sounds.

One avant-garde gesture from later in your career was pressing a single copy of the album Music for Supermarkets and auctioning it, having destroyed the master tapes.

JMJ: That was a premonitory act! I was protesting at the silly industrialisation of music that was happening with CDs, this El Dorado product in the Eighties. But digitalisation has ultimately caused the death of the industry.

You are synonymous with the word 'big': big sales (72 million to date), big concerts. Even your Unesco ambassador job relates to one of mankind's biggest problems, the availability and purity of water.

JMJ: When I started doing the big outdoor productions, it was not because of grandiosity. I just felt that electronic music sounded better outdoors - it gave a different depth to the sound. The visual spectacle was to compensate for the fact that synthesisers aren't sexy; you can't play them with the physicality of rock music.

Talking of rock, how did you get to have an asteroid named after you?

JMJ: It comes from this department of NASA. There's me, Zappa, Lennon, and Hendrix, all with stones in space named after us!

What's the concept of the new album, Teo and Tea?

JMJ: It's to do with encounters between people. I am interested in the way we have this culture of total connection - mobile phones, and emails - yet people increasingly feel this loneliness.

That was a side-bar for a longer Observer piece on the analogue synth gods of the Seventies, directors' cut of which is here.

He is a bit like Omni magazine, J-M J,  in so far as I never really paid him much attention at the time -- it was background stuff, just futuristic-business-as-usual...  Probably older brothers of my friends were into him, like the friend's brother who was building his own computer, or was it a synth? No, I think it was a computer. That was a pretty committed thing to do in those days.  But yeah, J-MJ, a passion for, that seemed like it might have intersected with the Omni readership, or the New Scientist readership. Or people who read Dune, but not Ballard.  Obviously a lot of people just liked "Oxygene" etc because it was a pretty tune, or even because they were the type of people who'd been buying Mike Oldfield records or Sky records (band, not label), ie. instrumental rock is the future types.


Same applies to Tangerine Dream. Remember seeing their name on the hoarding of Oxford Apollo in 1981 or 82 - the twilight of their UK fame, most likely - I doubt if they'd have been able to fill a large venue like that as the Eighties continued.  It would never have occurred to me to go see them, even if I'd not been an impoverished student. And then later when getting seriously into Krautrock I checked out the early T. Dream naturally, but never the Phaedra onwards Virgin stuff.   Probably just like yer Emeralds and Oneohtrixes and the rest, I got interested in the full on electronic proto-trance T.Dream and all the other analogue space epic dudes in the mid-2000s in part because you could find T.Dream and K. Schulze vinyl going cheap, and Vangelis and Jarre vinyl going real cheap. 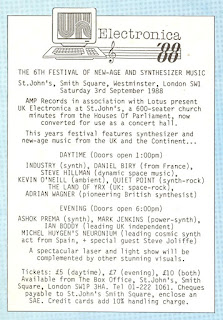 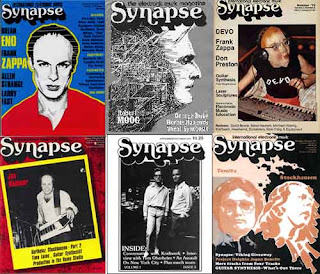 Posted by SIMON REYNOLDS at 9:48 AM