"originality is a red herring", or, Reenactment Art part 203

At The Comics Journal, an interview with Josh Bayer about Bayer's "covers comics" project, which writer Brandon Sodeberg describes thus:

"Rom recreates, panel-by-panel, stories from the Marvel space-knight book from the eighties, locating the still vital energy of this work, while also shaking off its relatively square and mainstream-courting tics. It’s the difference between say, the Kingsmen’s mealy-mouthed though radio-friendly version of “Louie Louie”, and say, Black Flag’s grinding, raucous reinterpretation."


Some Josh Bayer quotes from the piece:

"There was no master plan when I began Rom, though in some ways, I feel like “covering” or feeling free to appropriate is something I’ve been leading up to for years. I’ve always been excited by the idea that originality is a fucking red herring. People talk about being original like it’s so beneficial to everybody, but it isn’t. I remember a Kathleen Hanna interview in Maximum Rock & Roll where she was like, “People say that I sound like Poly Styrene but I don’t take that as a negative thing. I’m not into the novelty of the new.” I really love that phrase, “the novelty of the new.”

[Well, I love Hanna's rhetorical sleight, where a preference for innovation over reiteration, the original over the copy, comes to seem sneer-worthy. Those silly, shallow seekers of mere novelty!]

"... My Rom stories are loose adaptations. I change the names of all the characters except Rom, usually. I call the Dire Wraiths [from Rom] Verminous Knids after the villains from Charlie and the Great Glass Elevator because they are really, really similar. I’m willing to get things wrong and I’ve found out that a fuck-up can be much more interesting. It fits with my aesthetic of scraping together the book with scraps of bubblegum and shoelaces."

I guess Shakespeare worked with other earlier dramatist's storylines and old legends and historical tales and so forth, so why not? 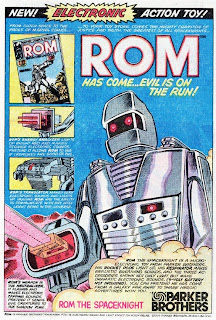 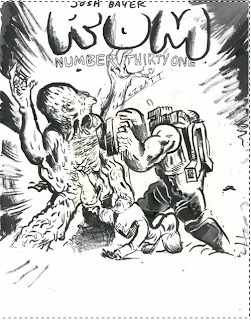 Two earlier posts on retro-izm in comics -- Daniel Cowes and the vintage / mid-century aesthetic in illustration and graphic novels, and a post picking up on some parallels drawn between retro-rock and the comix world by Marc Singer of I Am NOT The Beastmaster