bunch of pieces by me related to Retromaniacal concerns:

The relaunch issue of Spin - bimonthly, bigger, deeper - is out now. It's organised around the theme of Retro Activity aka "pastpresentfuture", aka "raid the past, dream the future". Indeed the issue was, says editorial director Charles Aaron in his introduction, partly inspired by Retromania. I contributed the framing essay, which includes an interview with Lana Del Rey and looks at how LDR's music/image relates to the broader cultural moment. Also provided the concept/text for an infographic about revivalism as an escalating syndrome during these past four decades.

The whole issue looks and reads great. Of particular R-mania relevance is the piece by Christopher R. Weingarten on the influence of David Lynch on current music.

In my LDR piece, Lynch comes up inevitably in reference to a kind of Fifties-via-Eighties syndrome you get in a lot of current music. I do my own Fifties-via-Eighties move in the essay, in the sense that there's a certain debt to Fredric Jameson's writings from that period that examine movies like Blue Velvet (and others) in terms of their relationship to the Fifties as American utopia. 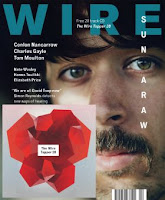 An adapted version of my Off the Page talk on David Toop's work is in the new issue of The Wire - in some ways this is the Part 2 to" Excess All Areas", that Retromania-related essay I did last summer in the Wire. Contains stuff on the collection-as-archive, exoticism/xenomania and how it's been intensified yet also emptied by the internet's abolition of geography, and also how information overload leads to burn-out. Over at The Wire website, I've done a Portal linking to online writings that connect to or inform the piece.

questions of history and music's relationship to the past are discussed in this
profile of Greil Marcus for The Guardian's A Life In Writing series, and also in the review of GM's The Doors for Bookforum from last year
Posted by SIMON REYNOLDS at 9:16 AM