* the French translation is published by Le Mot et le Reste Éditions on February 9th as Rétromania: comment la culture pop recycle son passé pour s'inventer un futur. I will be in Paris for the launch 2/20 to 2/23, details about the presentation on 2/20 to follow soon. 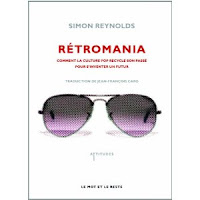 * the German edition is published in October by Ventil Verlag.

* in other Retromania news, the US edition has gone into its fourth printing, while the UK large-format edition, now sold out, has been replaced by the smaller, cheaper B-format with a new cover

Energy Flash is issued in its expanded/updated form in America in May via Soft Skull. Because the original Generation Ecstasy was an abridged version of the UK edition, this is the first time it's been available here in its full-length form; it also has the 40 thousand extra words, covering developments in the 2000s, that were added to the UK-only 2008 anniversary edition. More information here and new about events TK.