holding on to what's golden

Flicking through Albert Goldman' s collection of pop culture writings Freakshow: Misadventures in the Counterculture, 1959-1971 I was surprised to come across  - in the preface - an account of his sudden affliction by nostalgia for the music of his childhood. Surprised because this nostalgia eruption occurred in 1955 - when he was 28 -  and it was for the music of  the late Thirties and early Forties.

After years of taking studious (and studenty) interest in high culture, classical music, etc, some impulse draws him to "a couple of dusty old shellac records by Benny Goodman".  What interested me was that he characterises this fit of yearning for bygone simplicity and freshness not as limited to himself or a few others, but generation-wide: 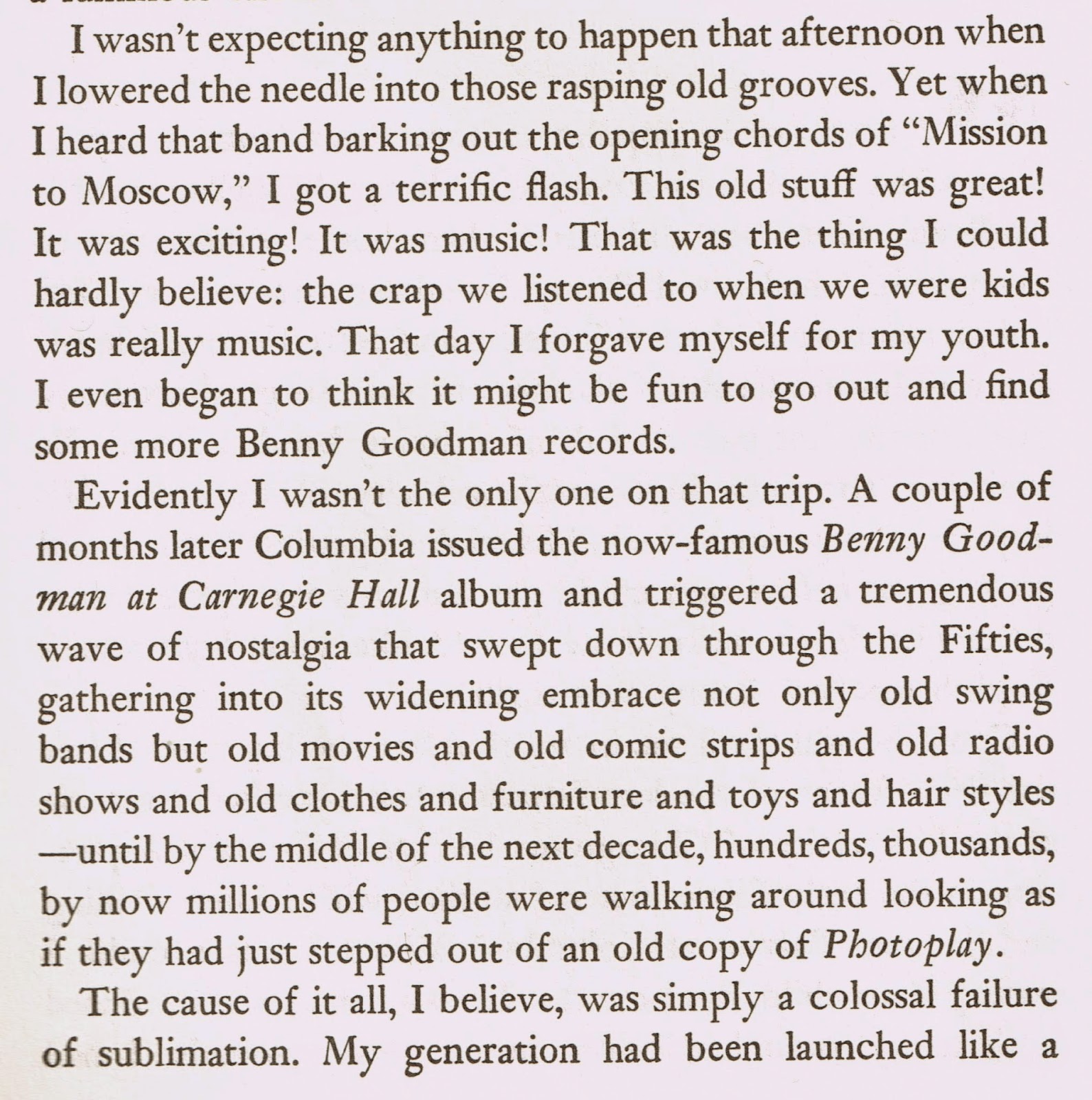 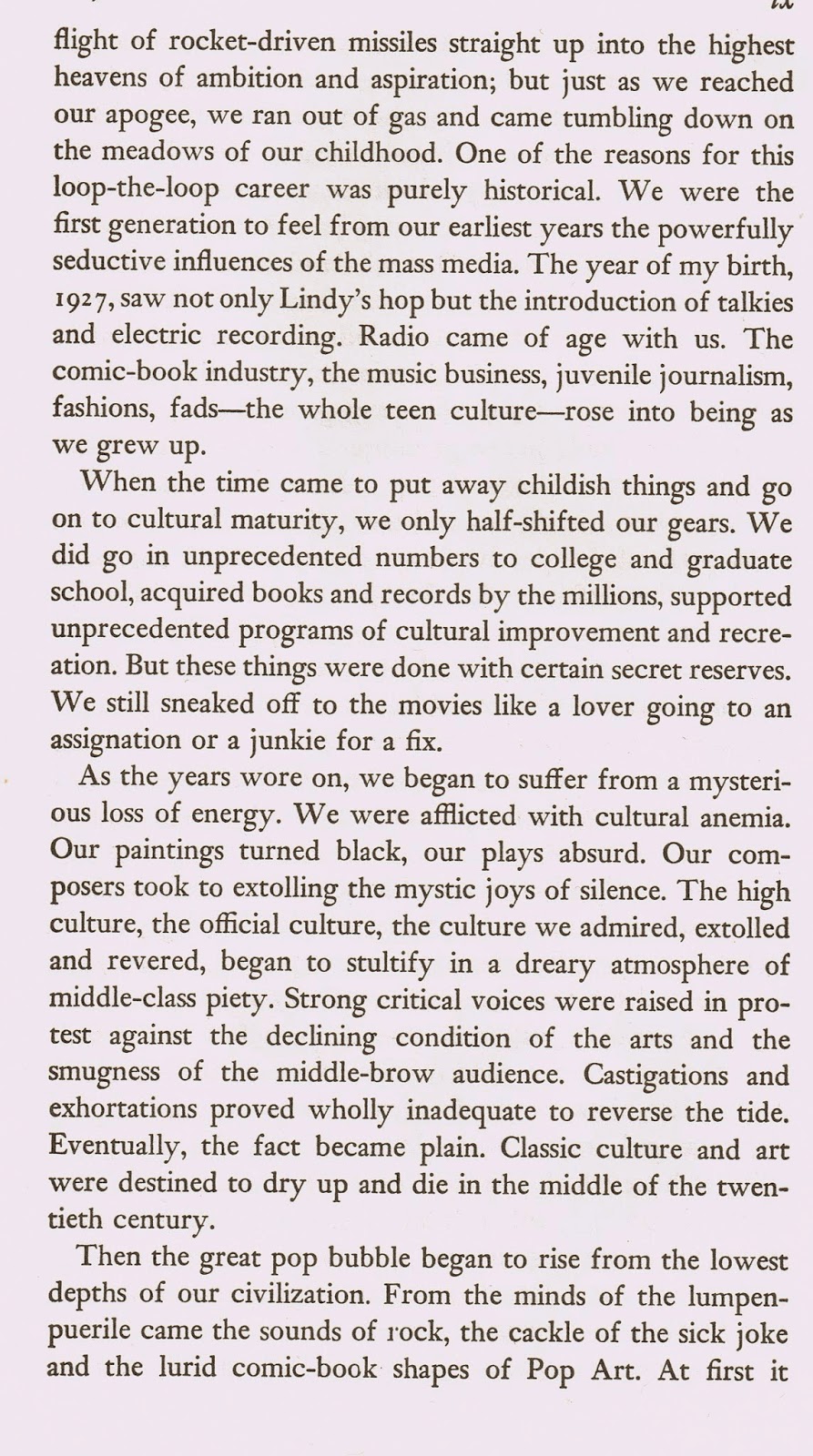 Also interesting was the way this reverie about a bygone episode of nostalgitis then develops, over the next page or two, into a notion of pop's rejuvenating raw force as an alternative to the aridity of high culture (abstruse, absurdist, angst-burdened etc). What he calls rock 'n' roll's "lumpen-puerile" energy serves as a barbarian invasion that, while brutish and brainless, reinfuses an effetely over-civilised culture with savage vigour. This argument reminded me both of popism's "thrill-power" paeans and my own exaltation of the lumpen sectors of dance culture. It's also quite Nik Cohn-y.

However, contradictorily, in the magazine essays collected in Freakshow, Goldman is a High Rockist, taking the opposite of Cohn's anti-art, pro-pulp stance. Goldman, now edging into his forties, is someone who only takes rock seriously from about 1967 with the rise of psychedelia, concept albums, the emergence of rock theatre, Dionysian performers like Morrison and Hendrix etc etc. In part one senses because it's then that he can ladle his own academic, high culture learning onto the music.

What's more Goldman deplores and denounces the back-to-innocence-and-simplicity, back-to-the-raw-beginnings move when it occurs within rock culture itself as a form of weak, confidence-sapped nostalgia. Viz this 1970 New York Times piece: 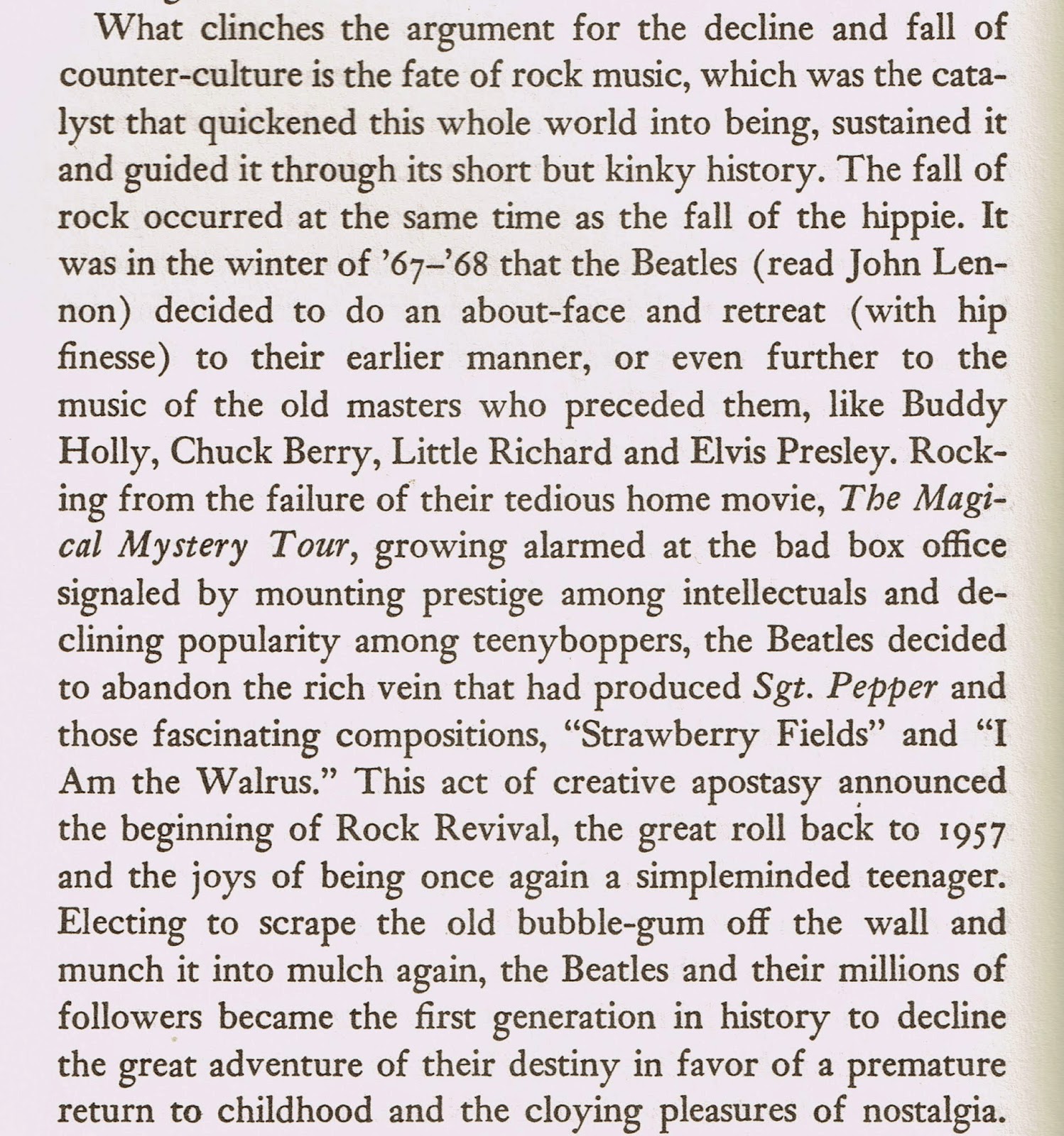 Incidentally the whole diatribe culminates in a rant against The Band, which, while unfair does contain a grain of truth and even seems to predict the stifling all-grown-up cosiness and smugness of The Last Waltz fraternity. .

"Endearing, amusing, bouncy and bathetic by turns, packaged in homespun and hominy, peddled with homilies about integrity and respect for old folks, the Band, or the Bland, is a promo man's dream. They don't have to be edited, cooled, controlled or explained; they run no risks of offeding anyone; they fit in perfectly with the worship of mediocrity that is beginning to take the place of the old devil cults. With their twangy, rubbery, pogo-stick beat... the Band is ideal for the adult bubble-gum market"
Posted by SIMON REYNOLDS at 8:06 AM