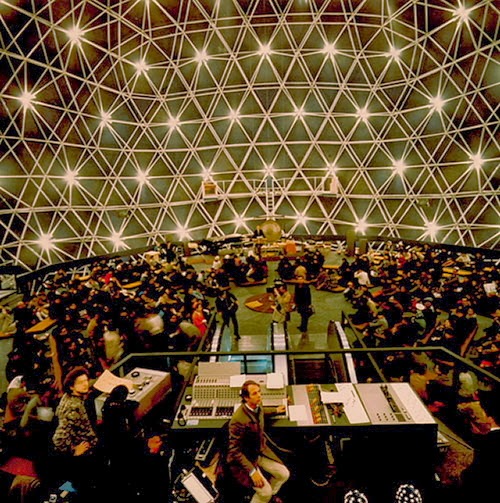 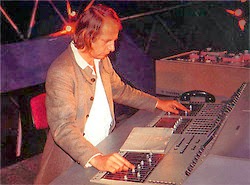 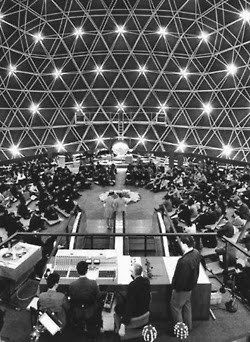 "The concept of "space"--in all senses: outer, inner, architectural-- suggests itself irresistibly when you listen to the music of the post-WW2 vanguard... The new music often featured alarming panning effects that exploited the disorienting spatial possibilities of stereophony, so that the composer worked with blocs of timbre that moved through space as they moved in time. ... Increasingly, composers explored quadraphonic or eight-speaker set-ups: sounds circled around the listener’s head, swooped and veered, receded and surged.  Stockhausen had a spherical auditorium built to his specifications at the 1970 World's Fair in Osaka, Japan, with nests for musicians scattered throughout the audience; the latter sat at "the equator", on a sound transparent platform, and surrounded by fifty speakers distributed in ten circles (eight above the equator, two below)." -- from "Out of Space: Nostalgia for Giant Steps and Final Frontiers", chapter 11 of  Retromania

Nick Currie: "I was just watching your recent appearance on the talkshow Charlie Rose and I was interested in something you said about the Osaka Expo in 1970: that it was, in a sense the high point of humanity and that things have been going downhill ever since...."
Rem Koolhaas: "I was referring more to the spirit of the world’s reaction to both the launch of Concorde and the Moon landing than to the Expo itself. But it’s not only about technical prowess: it’s more to do with what can be imagined and what dimension imagination has in serious life. An organization like NASA was, essentially, 4,000 people seriously entertaining fantasy: that scale of working on visionary elements is now incredibly reduced. At the moment we want to achieve goals that are very imminent, very realistic. Few organisations are able to define an unconventional aim and then to engineer its implementation, even over a period of ten or 12 years. These days, projects often have a maximum of only four years in which to be realized, as that’s the typical period that a politician is in power."


- from a Frieze dialogue between Nick Currie and Rem Koolhaas  on the occasion of RK's's Project Japan: Metabolism Talks 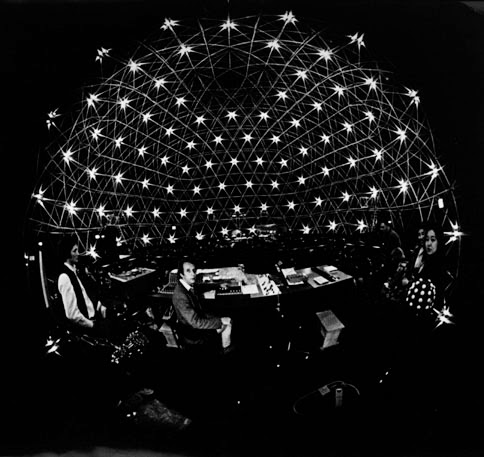