It's often been argued that Star Wars was the death-blow to science fiction as proper speculative fiction - or at least marginalised it severely both in cinema and in books.

Jonathan Lethem makes that argument in a great essay on the lost promise of s.f.  in the Voice Literary Supplement from the late 90s

"It’s now a commonplace in film criticism that George Lucas and Steven Spielberg together brought to a crashing halt the most progressive and interesting decade in American film since the ’30s. What’s eerie is that the same duo are the villains in SF’s tragedy as well, though you might want to add a third name, J. R. R. Tolkien. The vast popular success of the imagery and archetypes purveyed by those three savants of children’s literature expanded the market for “sci-fi”, a cartoonified, castrated, and deeply nostalgic version of the budding literature, a thousandfold. […] The golden mean of an SF jacket since 1976 looks, well, exactly like the original poster for Star Wars. Men of the future were once again thinking with their swords — excuse me, light sabers."

“I don’t think I’ve ever come across anyone so immersed in film. I have an idea he goes to bed in it, wrapped up in it, you know, the actual material.”  — Alec Guinness on George Lucas

Roger Copeland’s “When Films ‘Quote’ Films, They Create a New Mythology,” New York times piece of September 1977 piece "identified Star Wars’ debts to The Searchers, dogfighting movies, and Casablanca, and held it up as the most prominent example of a new kind of movie, the “film about other films.” Star Wars was “a film that makes so many references to earlier films and styles of filmmaking that it could just as easily—and perhaps more accurately—have been called ‘Genre Wars.’ ”

Stars Wars is when pomo goes mass culture - for the first time?

“Star Wars is built on top of many things that came before. This film is a compilation of all those dreams, using them as a history to create a new dream.”   — George Lucas, 1975 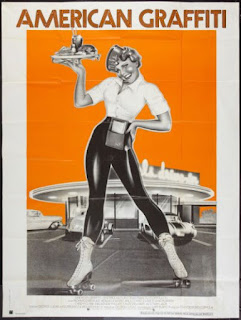 "You step into all this weirdness and you find that the scene that you’re doing is similar to scenes you’ve seen before in other movies that you can imagine very easily. There is a scene that’s based on a kind of Western concept. Shooting the guy under the table. There was no mystery to it. It was just a different face on something that was quite familiar.” -   — Harrison Ford  in 2004

“I put this little thing on it: ‘A long, long time ago in a galaxy far, far away, an incredible adventure took place.’ Basically it’s a fairy tale now.”    — George Lucas, December 1975 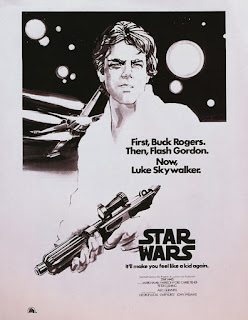 Reversing on the 70s advances in cinema that broke with heroic representations of violence and war (The Godfather, Peckinpah to an extent, Coming Home, Apocalypse Now, etc), it's a full-scale return to hero-myth narrative in which violence, when righteous, is glorious and also seemingly without visible consequences -  mess and agony screened out.

“We cut the end battle scene out of all kinds of old war movies, everything from The Dam Busters and The Battle of Britain to documentaries and Tora! Tora! Tora!”   — George Lucas, January 1976


The End of  (cinematic) History - “It should look very familiar but at the same time not be familiar at all.” — George Lucas, 1975

Now in the real-world supposed End of History (Fukyuma) scenario, the alleged Death of Ideology was actually followed all through the 90s and into our present age by the recrudescence of fascisms of every kind - nativist mysticisms of the blood, theocratic warrior-states on the war path, etc etc.... righteous-violence hero-myths a-go-go.  Not the death of ideology but the return of death-dealing human us versus inhuman them ideologies.

Stars Wars reminded me of this book I have been wanting to reread, Norman Spinrad's The Iron Dream - which is set in an alternate-history where failed painter Adolf Hitler moved to America and became a successful illustrator in the burgeoning Astounding Stories era field of science fiction (which involved a fair bunch of just-arrived immigrants) and then goes on to writes novels too - like his best-selling Lord of the Swastika. Meanwhile in the Fuehrer-less Europe, Communism has spread Westwards and swallowed up Germany and as I recall the whole Continent apart from U.K.

One of the problems as I recall with The Iron Dream is that the bulk of it consists of The Lord of the Swastika, which is a all-too-well executed parody of a sword 'n ' sorcery potboiler.

Here's Ursula LeGuin on the novel:

"Adolf Hitler's Hugo-winning novel of 1954, Lord of the Swastika, presented by Norman Spinrad as The Iron Dream (Avon 1972), is an extraordinary book. Perhaps it deserves the 1973 Hugo, as well. On the back cover Michael Moorcock compares the book with "the works of J.R.R. Tolkien, C.S. Lewis, G.K. Chesterton, and Sir Oswald Mosley.... It is the very quintessence of sword and sorcery." None of the authors mentioned is relevant, except Mosley, but the reference to sword and sorcery is exact. The Iron Dream can be read as a tremendous parody of the subgenre represented by Moorcock's own Runestaff saga, and by Conan the Barbarian, and Brak the Barbarian, and those Gor books, and so on--"heroic fantasy" on the sub-basement level, the writing of which seems to be motivated by a mixture of simple-minded escapism and money-minded cynicism.

Taken as a parody of S&S, the book hits all its targets. There is the Hero, the Alpha Male with his muscles of steel and his clear eyes and his manifest destiny; there are the Hero's Friends; there are the vile, subhuman enemies; there is the Hero's Sword, in this case a truncheon of interesting construction; there are the tests, quests, battles, victories, culminating in a final supernal super-victory of the Superman. There are no women at all, no dirty words, no sex of any kind: the book is a flawless example of clean obscenity. It will pass any censor, except the one that sits within the soul.

A parody of S&S, however, is self-doomed. You cannot exaggerate what is already witlessly exaggerated; you cannot distort for comic effect something that is already distorted out of all reality. All Spinrad can do is equal the crassest kind of S&S; no one could surpass it. But fortunately he has larger game in mind....

The beauty of the thing is the idea of it: a novel by an obscure hack named Hitler. The danger, the risk of it is that that idea is embodied in 255 pages of--inevitably--third-rate prose.

.... But, in this case, does it matter? How can a novel by Adolf Hitler be well-written, complex, interesting? Of course, it can't. It would spoil the bitter joke.

On the other hand, why should one read a book that isn't interesting?...

He has done, in The Iron Dream, something as outrageous as what Borges talks about doing in "Pierre Menard" (the rewriting of Don Quixote, word for word, by a twentieth-century Frenchman): he has attempted a staggeringly bold act of forced, extreme distancing. And distancing, the pulling back from "reality" in order to see it better, is perhaps the essential gesture of SF. It is by distancing that SF achieves aesthetic joy, tragic tension, and moral cogency. It is the latter that Spinrad aims for, and achieves. We are forced, in so far as we can continue to read the book seriously, to think, not about Adolf Hitler and his historic crimes--Hitler is simply the distancing medium--but to think about ourselves: our moral assumptions, our ideas of heroism, our desires to, lead or to be led, our righteous wars. What Spinrad is trying to tell us is that it is happening here.


"The “gookification” of enemies, in Spinrad's words, drew an ugly connection from the slaughter of faceless Orcs to the willingness of a populace to root for brutal war politics.
In a series of essays throughout the ensuing years, Spinrad expanded on the theme, naming the formula he takes aim at in The Iron Dream as “The Emperor of Everything.”... Spinrad wrote The Iron Dream as exorcism of The Emperor of Everything. He wrote in as blunt terms as possible because you don't cast out demons with subtlety. The prose are intentionally terrible, the language stilted — but all in that pulp-pitch way that keeps the reader going...   As Spinrad explained in his essay, “The Emperor of Everything,” “the reader who has been getting off on this stuff finds himself confronted with the awful revelation that he has been getting off on the racism, military fetishism and inner psychic imagery of the Third Reich itself.” He goes on: “The Emperor of Everything really is Der Fuhrer, suckers, and you have been marching right along behind him.” "Five years after The Iron Dream’s publication, Star Wars hit the screen — just around the same time that the imitation Tolkien industry ramped its poisonous stranglehold on popular fantasy into a never-ending succession of slaughtering ugly species and the “dark lords” they served....
When The Iron Dream was written, sci-fi remained far more of a niche, if an often influential one. But times changed and the culture changed with them. Star Wars enshrined a version of the space opera pulp into a mainstream cultural juggernaut and spawned imitators. The Tolkien imitators took the themes of epic struggle and handled them with far less empathy and nuance. The “formula for crap” Spinrad highlighted is successful and easy for a reason. It plays to the appealing side of the brutal boy's tale without the “burden” of nuance in works like Dune, which might get their audiences to think, just a bit, about the implications of the fantasies they're embracing."

forgot about this great Mark Fisher Guardian piece about Stars Wars from a few years ago  looking at how the film invented the modern format of movie as franchise - sequels, prequels, spin-offs, merchandise etc etc

portions relevant to the current argument:

"The arrival of Star Wars signalled the full absorption of the former counterculture into a new mainstream. Like Steven Spielberg, George Lucas was a peer of directors such as Martin Scorsese and Francis Ford Coppola...  But Lucas's most famous film was a herald of a coming situation in which mainstream cinema in the America would become increasingly bland, and it would become impossible to imagine films of the quality of The Godfather movies or Taxi Driver ever being made again....


"....Star Wars was a trailblazer for the kind of monumentalist pastiche which has become standard in a homogeneous Hollywood blockbuster culture that, perhaps more than any other film, Star Wars played a role in inventing. The theorist Fredric Jameson cited Star Wars an example of the postmodern nostalgia film: it was a revival of "the Saturday afternoon serial of the Buck Rogers type", which the young could experience as if it was new, while an older audience could satisfy their desire to relive forms familiar from their own youth.
"All that Star Wars added to the formula was a certain spectacle – the spectacle of technology, via then state-of-the-art special effects and of course the spectacle of its own success, which became part of the experience of the film.While the emphasis on effects became a catastrophe for science fiction, it was a relief for the capitalist culture of which Star Wars became a symbol. Late capitalism can't produce many new ideas any more, but it can reliably deliver technological upgrades."
Posted by SIMON REYNOLDS at 12:53 PM