getting the future wrong, #4 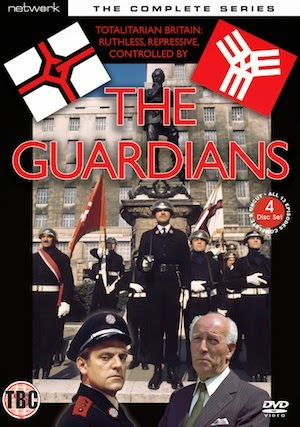 Instalment number four in this sporadic series on television dramas whose prophecies of tomorrow's Britain were wildly off-base concerns The Guardians, a 1971 series I had never ever heard until very recently, and that appears to be based around the "UK as Weimar Germany" notion that circulated during the era of power cuts, sympathy strikes, permissive society, multiculturalism etc - the scenario, equally feared and desired, of decadence, followed by economic collapse, followed by authoritarian take-over and the restoration of order, values and national strength.   There were thirteen hour-long episodes and it's now available again on DVD.

from Network on Air: "Following a period of mass unemployment, hyperinflation, social disorder and industrial unrest, democracy has been swept away amid a raft of security measures; law and order have been restored under a new regime, whose totalitarian rule is enforced by uniformed paramilitaries known as the Guardians. Behind the slogan ‘Make Britain Great’, the outwardly benign regime suppresses all opposition, while the Guardians, taking orders from their shadowy leader, the General, have become the true holders of power. There are voices of dissent, however; a loose affiliation of resistance groups, collectively known as Quarmby, has begun a clandestine struggle against the regime. But opposing factions quickly emerge within the movement – and with them, the inescapable moral dilemmas faced by all those who must use force to achieve their ends.

"The Guardians’ chilling vision of an Orwellian near-future has remained unseen since its original airing in 1971. Created by Rex Firkin and Vincent Tilsley, whose combined credits include The Prisoner, Manhunt, The Death of Adolf Hitler and The Forsyte Saga, the series anticipated many more recent dramatisations featuring similarly dystopian landscapes, and has been praised for its insightful, intelligent handling of its subject; the grey area in which resistance tactics may disturbingly mirror those of the oppressor is acknowledged, and ambivalent, doubt-ridden characters exist on both sides."


Also via Network On Air, fan Ian McLachan looks back at the series:

"The Guardians – first shown in 1971 – is a programme that I have always wanted to revisit, as it was one that had a profound effect on me when I first saw it. A political thriller that did what all good dramas do; make you think!

"The Guardians is set in the not too distant future and in the previous few years there have been a number of problems in Britain. A coalition government has sadly not been successful and it has fallen. A new Government has taken over – but it is an unelected one meaning there is a token Prime Minister who has very little real power. That is in the hands of the Guardians who are a ruthless paramilitary force which are overseen by The General – someone whom, at the beginning of the series, is very much in the background. Those people who have taken over want the general population to believe that this new unelected Government is in place for the people’s own good. However, not everyone is happy about this state of affairs. There are various resistance groups known as Quarmby who want to overturn the government and put something different in its place.

"The series is rather unusual in that, while there is a developing narrative running throughout the series, each of the episodes deals with a particular aspect of that ongoing storyline. There is a definite ending to the series in its thirteenth episode – End in Dust – which is particularly powerful.

"Like Orwell’s 1984, the future here is rather bleak. While it paints a vision of what an extreme right wing government might look like, I would have to say that I feel governments of other persuasions could also have adopted some of the ideas contained within the narrative. There were times revisiting it when I was amazed at just how prophetic the series actually was.

"While the series has a number of leading players, they do not appear in every episode. While some of them are perhaps more three dimensional than others, none of them could be described as an outright ‘goodie’ or ‘baddie.’ In fact the resistance members seem as bad – if not worse – than the government that they are opposed to.

"The actors including Cyril Luckham, Edward Petherbridge, John Collin, Lynn Farleigh, Derek Smith and Gwyneth Powell are uniformly excellent and particularly shine in the interesting ‘conversations in studio sets’ that make up the bulk of the series.

"There are some rather surprising moments and after having watched it you will never look at an umbrella in quite the same way again (really…)!

"The theme music and opening titles are very impressive and they get the thirteen episodes off to an excellent start. There is much that is implied rather than shown and to get the most out of the programme you really have to concentrate and reflect on many of the important issues raised – issues that are still relevant to us today."